Market analysts rank countries by the wealth of their citizens 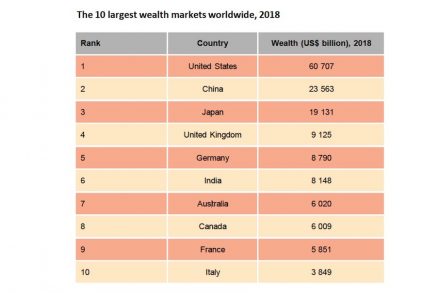 Market analysts of the new World Wide Wealth Company, based in the South African City of Johannesburg have developed a novel method of ranking countries’ economic strength; they use the wealth of citizens to gage the economy. Real Estate, Investment funds, stakes minus debt and the citizens’ obligations all play into the statistics. The State economy as such is not reflected in the data.

According to current figures, the USA is once again the wealthiest country, followed by China and Japan. Ranking continues with the UK, German, India, Australia and Canada.

But the vantage offers only a rough estimate. Figures become clearer when adding the size of population into the equation. Australia then stands in first place according to researchers.

The strength of these markets is pivotal on the size of the country’s populations.

The current analysis entitled „Global Wealth Migration Review“ also takes a look at where the wealthy and super-rich settle and their emigration. Australia led the statistics with the highest increment of millionaires and billionaires.

The most popular cities for the super-rich are Dubai, Los Angeles, Melbourne, Miami, New York, San Francisco and Sydney.
The statistics were compiled in cooperation with the AfrAsia Bank.