Building quickly and cost-effectively: edifices made entirely of small blocks of natural stone are popular in France 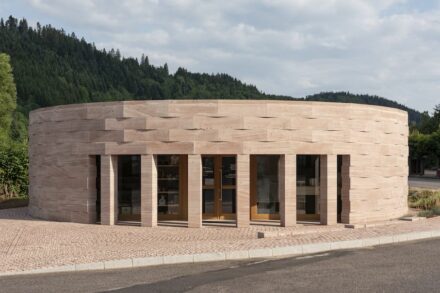 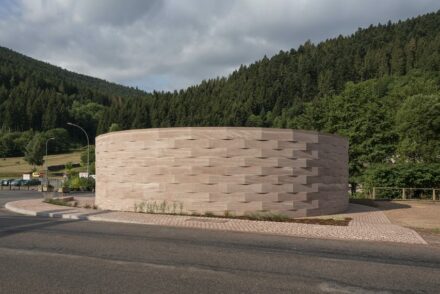 In a small village in the Vosges mountains, a visitor center was built entirely of sandstone and wood

Everywhere in the world there are efforts to strengthen the regions and prevent people from migrating to the metropolises. One of the questions is to what extent architecture can help.

An interesting answer to this question now comes from the village of Plainfaing in France’s Vosges Mountains. There, a public building has been constructed using only locally available materials and a modern design. The aim of the architect was also to strengthen the economy of the region.

It is the visitors’ centre in the village of Plainfaing with about 1600 inhabitants. The need for such a centre at an altitude of 1000 m in the Vosges low mountain range is due to a special feature: the Confiserie des Hautes Vosges, a confectionery manufacturer known throughout France and beyond, has established itself there and welcomes some 250,000 visitors a year.

Architect Christoph Aubertin from the office partnership Studiolada designed a one-story round building for the visitor centre, for which only natural stone and wood from the region was used. Mind you: exclusively. 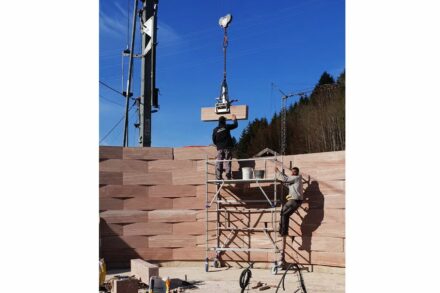 This is because the walls of the building are composed of small blocks of stone. This is another example of building with solid stone, popular only in France. We had already reported on projects of this kind on numerous occasions, which show exceptionally good ecological balances and which can also be kind of a savings bank for the owner (as the building material can be reused, one day).

For a complete circle you need 32 blocks. 10 circles lie on top of each other. Then only the roof follows. The truss is made of different types of wood, which were supplied by 4 sawmills in the vicinity. 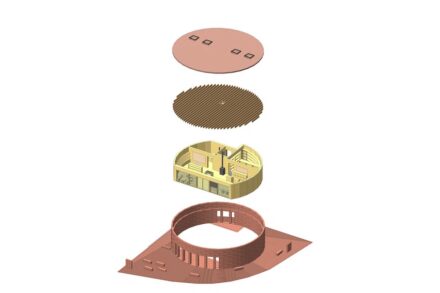 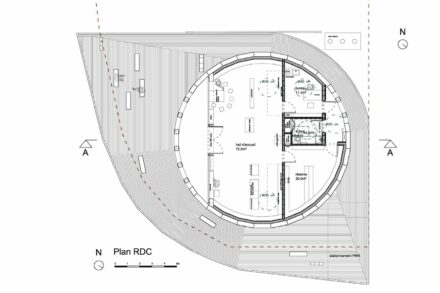 Inside, various rooms are divided, with the walls made entirely of wood getting their stability from the connection to the roof. In front of the outer stone walls, the rooms are insulated and clad with wooden slats. 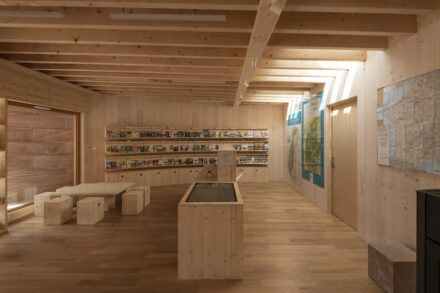 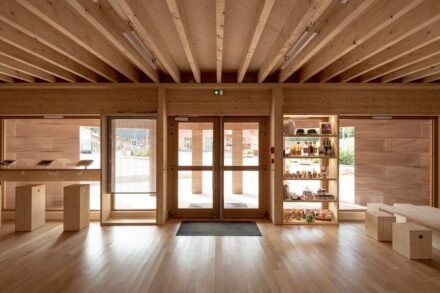 In the vestibule and outside, the stone walls are natural without any covering or plastering.

This reduces the construction costs, and in addition, the also the construction time, because the blocks simply come from the crane and are placed on top of each other. The
weight keeps them in place. Simple tile adhesive was used as mortar. 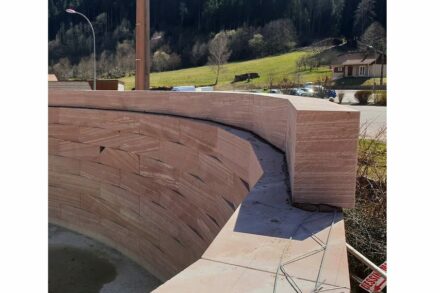 Only for the stone layers with reinforcements a lime mortar of about 2-3 cm thickness was used.

The facade of the building is unusual. It inevitably results when rectangular blocks are used for a round building. CNC saws are nowadays able to cut the blocks with sufficient angular accuracy so that the individual elements fit together perfectly.

Not to forget: the round shape also makes it possible that with a usable area of 150 m² comparatively little material had to be used for the outer walls.

The striking pink-colored sandstone comes from the nearby Champenay quarry in Plaine. It is very hard, so it was also used as paving in the outdoor areas and as flooring in the tourist centre.
The project was awarded one of the architecture prizes for “Building with natural stone in the 21st century” in France 2019.