Greenpeace once again throws rocks into the sea, this time in cooperation with the artist Fiona Banner aka The Vanity Press 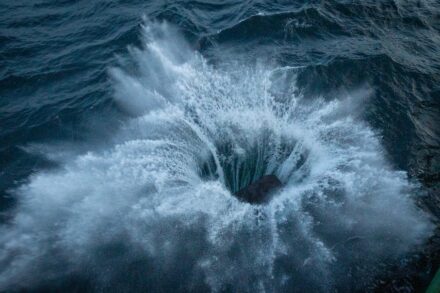 Once again, Greenpeace has sunk thick boulders in the North Sea to protect the animals and plants there. This time it was at the Dogger Bank, which has been declared a nature reserve, but the British government still allows trawling. With a whole chain of such rocks, an area of about 50 square miles is now being protected, and the entire project came to an end in October 2020 with 2 media-effective actions: Greenpeace had won the British artist Fiona Banner alias The Vanity Press as an activist, who turned 3 granite boulders of about 1.5 tons into works of art.

One rock called “Klang Full Stop” was placed in front of the Department for Environment, Food and Rural Affairs (Defra) in London to draw the attention of the head of the department and the staff to the destruction of the oceans (and it was immediately removed), 2 other stones were thrown into the sea above Dogger Bank by the Greenpeace ship Esperanza. 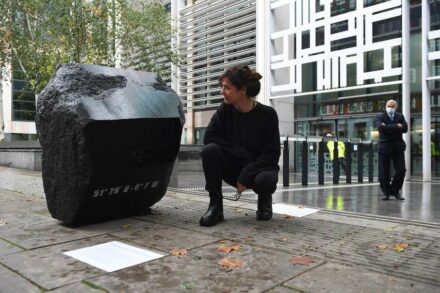 This large sea area in the North Sea between England and Denmark is very shallow and plays a vital role in marine life in the northern Atlantic. It was – like the English Channel – free of water during the ice ages and formed a connection between the continent and Britain. With the warm periods, it was washed over again, possibly in devastating tsunamis. 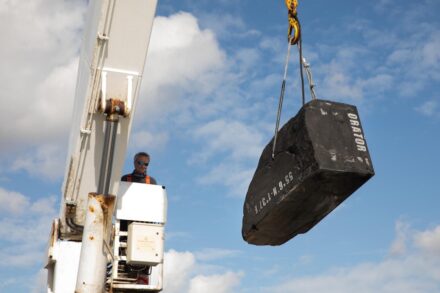 For her action, the artist had chosen pieces of granite that themself came from the sea. She had hardly worked the stone at all, only dyed it deep black, partially beveled the sides and painted the coordinates of the berth or the name on it.

The title of the art action was “Full Stop“, the individual granite boulders were called “Klang Full Stop”, „Orator Full Stop“, and “Peanuts Full Stop“, which refers to names of fonts.

By this, the artist wanted to point out that communication had reached “a dead end“, as she says: the authorities talked about nature conservation, but did not really do anything about it. “We are fed up with the puffed up rhetoric of this government. This is to remind them that when words become meaningless, democracy dies“, she is quoted on the Greenpeace website. 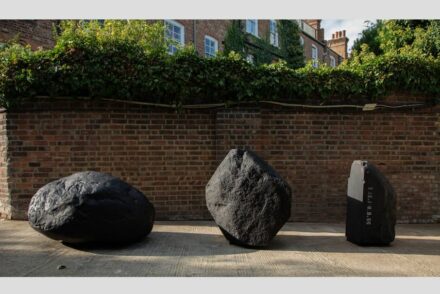 In the British press, the name “ambush sculpture“ has already been coined for the boulder‘s deployment in front of the Defra building. This refers to artistic actions or installations that recently took place like guerrilla raids and were not designed to last long. The blog Tmrw Magazine relates to actions in cities like Bristol or Bath and mentions the artist Banksy, whose works are characterized by fleetingness.

To ensure safe navigation for the mariners in the shallow sea area, Greenpeace has informed the responsible naval authorities about the location of the sculptures.