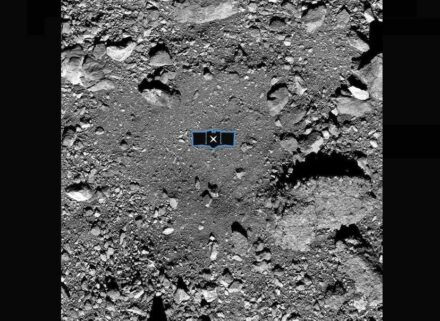 On October 20, 2020, Nasa’s OSIRIS-REx spacecraft is planed for a touch-and-go visit at near earth asteroid Bennu. A robotic arm shall touch the Celestial body’s ground for a few seconds and collect a sample of rocks and dust from the boulder-strewn surface. Since the spacecraft arrived at Bennu in 2018, scientists have been characterizing the asteroid’s composition and comparing it to other asteroids and meteorites. They also selected the places for sample collection, including the primary site Nightingale shown on the photo.

A webpage gives an overlook of stonewalls in Ireland, among them so-called Famine walls. The were built during the potato famine to let the starving population earn some money.

“What role do tourists play in the future of Confederate monuments?“ is a question National Geographic magazine discusses at the example of the Stone Mountain Park near Atlanta, GA (1, 2).

On the occasion of the 100th birthday of German artist Joseph Beuys (1921-1986), oaks are to be planted again together with basalt columns. The initiative refers to the artist’s action “7000 Oaks” at the documenta 1982 in the city of Kassel. Coordinator of the current project entitled “Planting Oaks in Honor of Joseph Beuys“ is Stadtkultur, the culture network of Bavarian cities (German).

Deep-seabed mining is considered a way to address the increasing need of rare metals. But it causes disturbances with a long-term impact on carbon flow and the microbial loop at the deep seafloor, international scientists say.

Video of the month: Chiseling of an alabaster lampshade of British CTO Lighting company. The veining of the stone means that no two lamps are the same. Some are almost white whilst others have grey striations (video, 1).