No more hybrid: in 2021, BAU in Munich will only be held in digital form 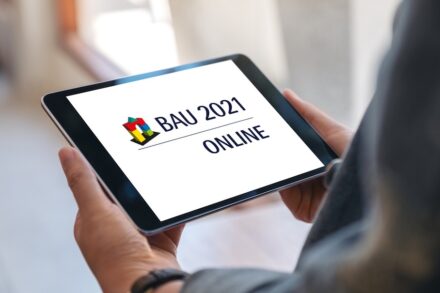 In a survey, the exhibitors have pleaded for the trade fair only online without a presence part

With the new second wave of corona infections all over Europe, things are constantly changing. The trade fair in München, Germany, sent us the following press release about BAU:

On September 30, 2020, Messe München announced BAU would not be held as a conventional trade fair in January 2021, but that it would not be canceled en-tirely. On Friday, October 16, 2020, a poll of exhibitors ended—we had asked how they would like to present their products and innovations between January 13 and 15 in a much altered and smaller format. A clear majority of the exhibitors said that they wanted to concentrate on the purely digital concept.

Based on the results of this poll, the management of BAU has decided for 2021 to focus just on a digital format. This has the advantage that all resources can be concentrated on digital presentation options and a digital supporting program. The specific offering for “BAU ONLINE” will be announced to customers of BAU in the coming days.

BAU ONLINE will feature talks and discussions from the forums as live streams and as recorded videos—for a global audience. In addition companies will have the opportunity of presenting their products virtually in their own online sessions. To enable participants to engage with each other, there will be virtual networking modules within the digital format. The aim is also to integrate the traditional BAU Info Talks between trade journalists and exhibitors into BAU ONLINE.

In 2023 BAU will take place again as normal, and it will include a digital offering such as is being implemented for the first time next January. Messe München is confident this is the right track: Because almost all the big-name exhibitors who are staying away in 2021 because of the coronavirus pandemic have already announced their participation in the next BAU in January 2023.