Shelf “Monument” by La Chance and Atelier Cocorico: easy to assemble and disassemble without tools 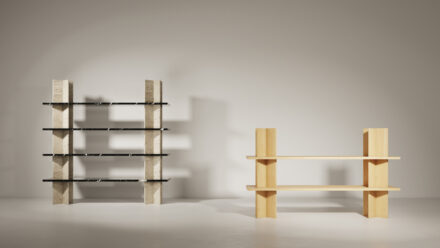 In the version made of natural stone alone, the empty piece of furniture weighs 380 kg

As known from many design objects, weight becomes a problem when they are made entirely of natural stone – this is also true for the new shelf “Monument” by the design studio Cocorico (Kikeriki) for the French company La Chance: In its maximum version (197 cm height, 195 cm width, 4 shelves à 45 cm depth) it weighs 380 kg – probably for those who have a stable floor that can permanently support such loads.

However, the designers Mathieu Girard and Gauthier Pouillart were probably aware of the problem, because the shelf is also available in a stone and wood version, i.e. the boards are made of wood and the supporting pillars are made of stone. 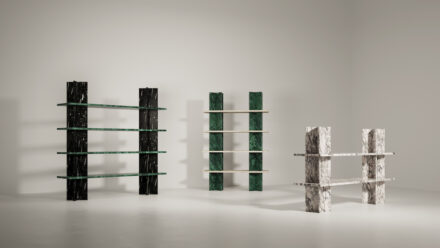 The construction has a peculiarity that has been seen many times before: the supporting posts are not made of one piece, but of individual elements. That makes the assembly conceivably easy, since one must put on for the assembly the individual pieces like elements from a building set only on top of each other. “Monument” does not require any screw connections or other joints.

The designers write that the old wooden cupboard in their grandparents’ house inspired them to create the design: that piece of furniture could also be quickly and easily dismantled and reassembled. The characteristic feature of such old furniture was the stable material, i.e. grown wood, which was able to withstand the repeated tightening and loosening of a screw.

In this respect, the designers took up the old concept of real materials in their design. What speaks for the use of stone elements for the posts is that their weight gives the shelf great stability. In addition, the posts are X-shaped so that they can hardly be knocked over.

Consequently, the furniture can also be set up free-standing in the room. 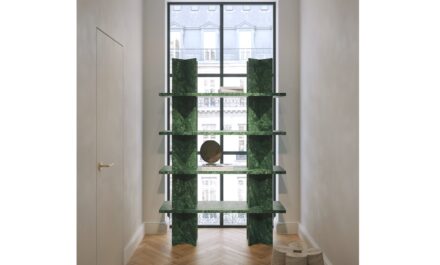