More than 120,000 m² of Jura limestone were used for the flooring in the new international airport Berlin-Brandenburg 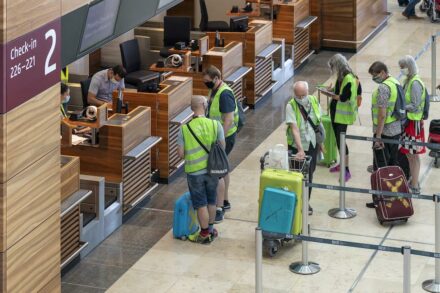 The architecture of Gerkan, Marg and Partner is not spectacular but functional and conveys a little homeliness

For a while, a joke was popular: it said that one of Berlin’s special features was that there were no delays in the flights – the whole airport was delayed.

But now, after more than 20 years of planning, construction, and amendments, the Airport Berlin-Brandenburg, named after Willy Brandt and IATA-abbreviated as BER, is finally going into operation. Worth noting: this happens after seemingly endless delays at a moment when air traffic is very reduced because of Corona and nobody knows when and if the former transport volume of millions of passengers will be reached again.

Of course, we are particularly interested in the use of natural stone. First, just a few words about the overall architecture in Terminal 1, where passengers arrive and check-in: the planners from Gerkan, Marg & Partner (gmp) did not plant a grand architectural gesture for BER at suburb Schönefeld. The train ride from the Berlin city center takes about half an hour.

Instead, as a visitor, one has the impression that everything is very simple and clear, that it is easy to find one’s way, and that there is even a certain homeliness. Architectural critics wrote of “German architecture in the truest sense of the word.“ 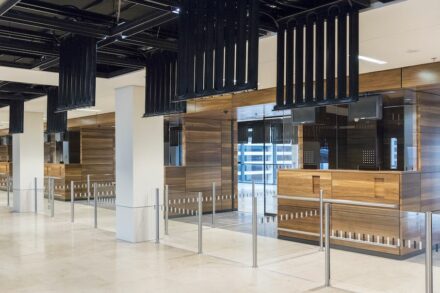 This brings us back to the materials and their colors: it is the brown of the French walnut veneers that characterizes the walls and doors and also the yellow of the Jura limestone on the floors. At the baggage check-in and the passport check, there are smaller areas with the darker Kirchheimer Muschelkalk. Of course, stainless steel and glass also characterize the overall impression. 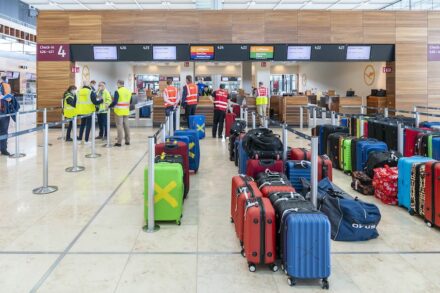 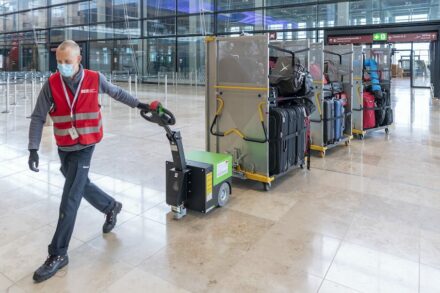 In total, over 120,000 m² of natural stone were laid. The grid of the 3 cm thick tiles is usually 62.5 x 62.5 cm. Metal joint profiles provide an additional structure; they are necessary so that the stone fields can expand/tighten above the heating/cooling underneath.

The natural stone was supplied by a consortium of several companies led by JMS (Jura Marble Suppliers). Their work was completed as early as 2012; during the subsequent amendments of the long list of technical defects in the following years, the valuable floor was under a protection.

Our impression: it is nice to find something different from the usual cold granites in an airport. Jurassic limestone has proven itself many times in high-traffic areas, for example, in large shopping malls.

However, cleaning has to be done correctly. With Jura limestone you have “a little extra work here,“ says Florian Billen, who advised the airport company on natural stone, “but the formation of walking paths can be easily avoided with the right cleaning cycles.“

When entering the hall, passengers also pass through large clean off zones. In winter, additional mats keep away the de-icing salt, which is dangerous for limestone.

The cleaning machines are also adapted to the natural stone with their wheels and prescribed cleaning pads. 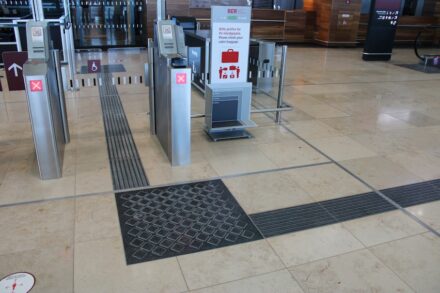 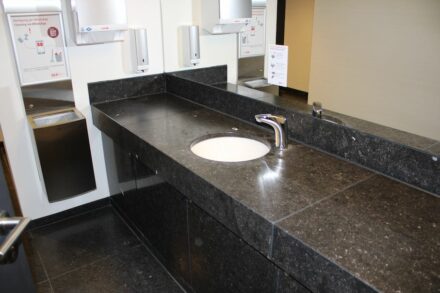 A striking contrast to the light limestone is given by the dark Belgian Blue Stone. It is used mainly for the tactile walking surfaces on the floor and for the vanity tops in the restrooms. The supplier was Renier Natuursteen company located in Aarschot in Belgium. 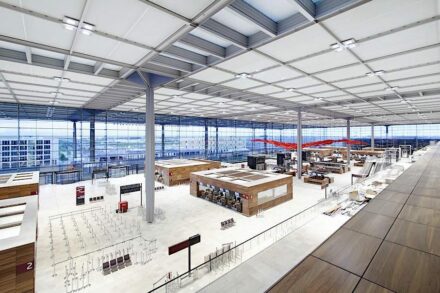 The terminal hall is 32 m high and measures 240 x 180 m. It is located between the two parallel runways with a distance of 1,900 m between them. They can be operated independently.

The terminal hall bears 8 cube-shaped islands for check-in. They are sometimes called “houses“.

Remarkable is the compactness of the airport. With only 2 escalators from the station in the basement, one can reach the check-in hall. 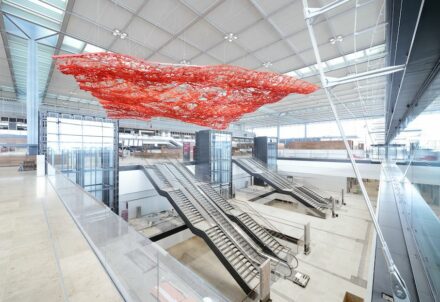 As percent for art, there are, among other things, 5000 coins from distant countries inlaid into the floor and showing kind of a starry sky at the feet passengers‘ feet. The idea is from the artist duo Stoebo. Not to be missed in the entrance hall is the “Flying Carpet“ by Pae White. 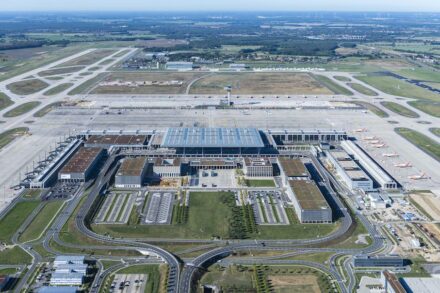 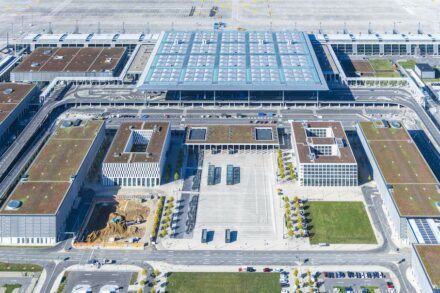 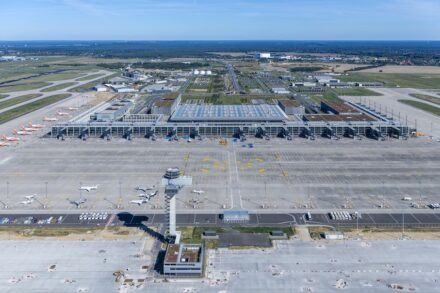 In 1998 the architects of gmp started the planning for the BER. It was to be opened in 2012 – but was not approved by the supervisory authority, mainly due to deficiencies in fire protection. Just 4 weeks before the opening date, there was a complete cancelation. Then 8 years followed, during which many curious deficiencies came to light, managers came and went, until the final opening now on October 31, 2020. 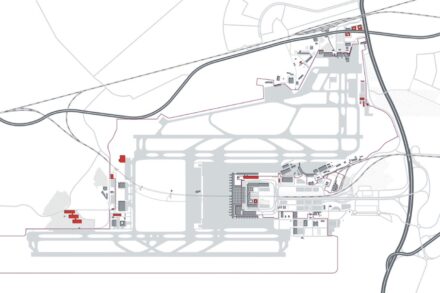 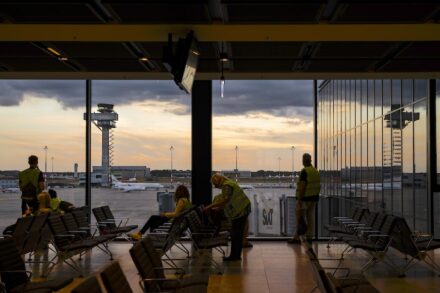 Originally, the total construction costs were to amount to €2.5 billion. In the end, it was 5.9 billion.