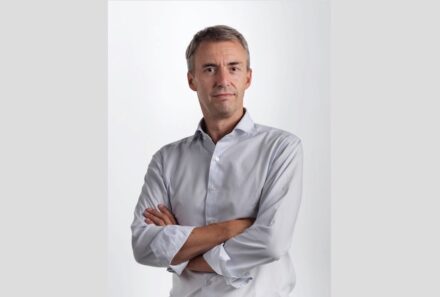 For the virtual Marmomac Restart, the mastermind among Italy’s stone designers summarized his ideas from the last decades

Raffaello Galiotto’s lecture at the virtual Marmomac Restart was entitled “Seriality in Stone Design”. The mastermind among Italy’s natural stone designers summarized the central themes of his work from the last two decades.

Some will be frightened by the theme of a serial production of objects made of natural stone: for stonemasons it is often a horror that Galiotto lets the computer-controlled machine approach the time-honored marble. And also, the idea of producing stone objects in larger quantities is seen by many as a violation of a special feature of the material, namely that each piece is unique.

Galiotto, however, wants to use the new tools to open up new areas of application for the stone and thus find new design possibilities even for the appropriately trained designers.

One of his core ideas is respect for the million-year-old material.

He already presented ideas on this a few years ago at the “Italian Stone Theater” in Hall 1 of Marmomac: they were design concepts that keep waste to a minimum.

Galiotto showed concepts how to cut a block of stone in such a way that you can make as much as possible out of the pieces that you extract. One idea is the principle of the Russian matryoshka dolls, where one part emerges from the other. Galiotto extended that basic concept by twisting and recomposing the individual pieces. By the way: this type of design also reduces the number of cuts, which saves energy and water (see below: “Recomposition and twinned forms”. 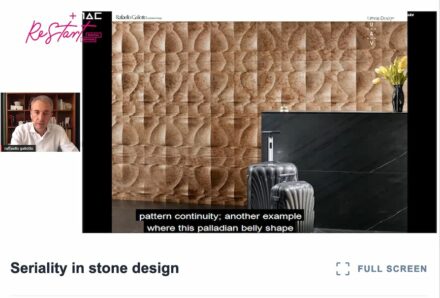 Galiotto began his lecture with an analysis of the material.

He stated that one of the strengths of the stone is its resistance to compression (it can be subjected to great pressure), one of its weaknesses is its low resistance to flexion (bending).

Galiotto mentioned a whole list of other characteristics of the material: hardness, durability, color, and veins. And: stone carries home within it what can be experienced in many places in the old of the old cities.

Galiotto asked the designers to consider and use these characteristics of stone in their developments – in other words: to create a design appropriate to the material, which respects what the stone can and cannot do.

Strangely enough, he did not even address one particular aspect, namely the high weight of natural stone. In many cases, this leads to the fact that design objects cannot be sold on the markets.

Galiotto made explicit reference to Andrea Palladio, the great 16th century architect, in his thoughts on design for series. He discovered serial design with him: certain shaped pieces are repeated in many objects.

At the Marmomac in 2018, Galiotto had already shown a collection of bathroom furniture for Palladio’s 500th birthday that was unmistakably inspired by his lines (see below: “Palladio e il Design Litico”).

The following year, he continued the ideas with inspirations from the palaces of Venice (see below: “The Doge’s Marble”).

Based on these ideas, he created many variations of seriality in his creations of tiles for the Italian company Lithos Design.