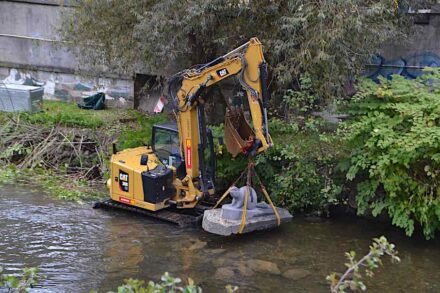 Elephant Tuffi, beaver Bonny and salmon Lucky made by sculptors are intended to slow down the flow of the watercourse and be points of attraction for people

Three so-called sturgeon stones have been inserted into the Wupper River between Barmen and Elberfeld in Germany since 2019. They are the salmon Lucky, the elephant Tuffi and most recently the beaver Bonny. The animal sculptures each weigh a good 2 tons plus a platform of another 1 ton.

The initiator was the association Neue Ufer Wuppertal, and its aim was to use them to create attractions in the riverbed so that citizens would once again experience the water as part of their home.

On the other hand, the animal sculptures also serve as obstacles in the flow, around which zones with reduced flow velocity are formed. These then provide habitats for animals and plants.

The sculptures were made of natural stone – the material ensures that the figures will withstand the abrasive forces of the current and also the sometimes massive floods over the targeted period of 50 years. 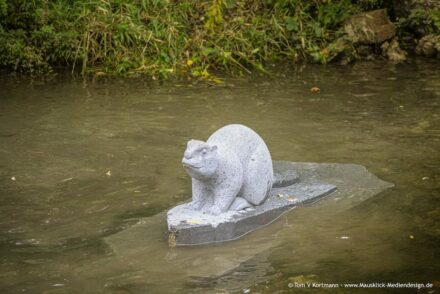 Basalt from the nearby Eifel region with its ancient volcanoes was used. The stone is durable enough for such purpose. To get the permission for it, some of the many official procedures that the association had to do were necessary. Because: actually, only Greywacke may be brought into the river, because it is the dominating rock there.

The idea was born in the course of the renaturation works that have been carried out on the watercourse in recent years. As usual, the riverbed was widened in some places and raw rocks or rectangular boulders were placed in the water.

The club did not miss this opportunity. Things started with Lucky the salmon, a fish sculpture by sculptor Christiane Püttmann. The sponsor was the Wupperverband. 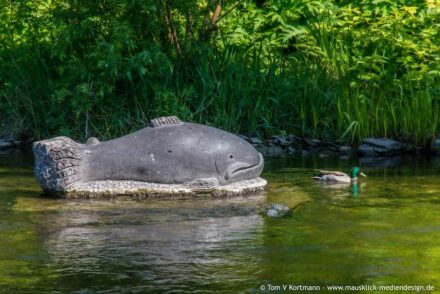 In 2020, the stone beaver Bonny and Tuffi the elephant were added. The beaver was created by Frank Breidenbruch. The sponsor was the Stadtsparkasse (savings bank). The sculpture can be found in the river near the bank’s headquarters. 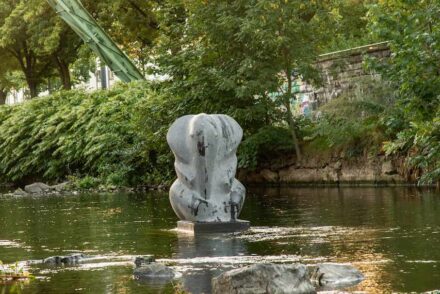 The elephant Tuffi was created by Bernd Bergkemper. The sponsor was the Jackstädt Foundation. The location for the sculpture is between the supports 377 and 378 of the suspension railroad.

The fact that it was erected in the summer of 2020 had a historical connection: In 1950, exactly 70 years earlier, a young pachyderm from a traveling circus lost his nerve during a promotional ride on the suspension railroad and jumped out of the door into the depths. He didn’t hurt himself, chroniclers report, because most of the suspension railroad runs right above the river and Tuffi landed in a mud hole in the water. The place is approximately where the sculpture stands today in the river.

Tireless as the members of the association are, they have already identified new places for sturgeon stones. “They are (almost) always placed in the river where renaturation is pending, which saves costs and lengthy discussions,“ writes association chairwoman Dajana Meier to us.

The next renaturation is pending at the Bayer plant site. “Unfortunately, the plant has so far refused to donate a sturgeon. So, we are still looking for a sponsor,“ she adds. 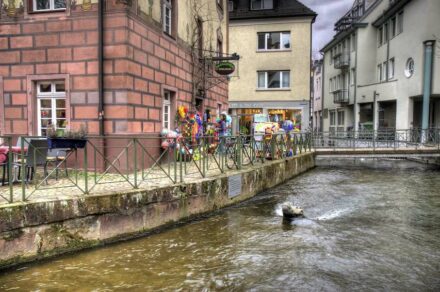