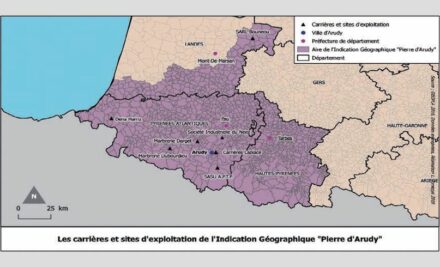 The title protects against illegal use of the product name, it is only valid in France, but there also for imports

Products typical of France can defend themselves against illegal use of their names with a Protected Designation of Origin (Indication Géographique, IG). In the meantime, the corresponding seal has been awarded to a total of 12 products. Among them are 4 natural stones. At the end of 2020, Pierre d’Arudy was one of them to obtain certification. The French magazine Pierre Actual had reported in its 11/2020 issue.

It should be noted that this protection against name fraud applies only within France’s borders. There had been cases where French manufacturers of concrete named their material after natural stones.

However, the title is also an effective means of preventing imports under false labels.

Pierre d’Arudy is a limestone quarried around the town of the same name on the border with Spain. In commerce it is sold as marble, even though it has not undergone metamorphism in formation. This is also common elsewhere.

It has been processed for many generations. It was and is used in road construction, gravestones and architecture. Manufacturers like to point out that it can be found in the Opéra Garnier in Paris and just as much on the Empire State Building in New York. 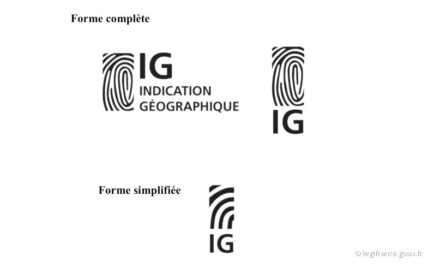 In 2014, the government had created the legal basis for the Indication Géographique. The way to achieve the seal is not easy.

For example, individual companies cannot apply for the title, but only groups in cooperation. One stated goal is for competitors from one area to join forces and for the big as well as the small to cooperate.

Applicants must prove that their product has economic significance for the region and also plays a role in its cultural identity.

In the case of natural stones, detailed information must be provided on the petrography of the stone, for example. It must also be explained what sets the material apart from other types.

This sometimes leads to marketing poetry in the applications, but it also leads to the manufacturers thinking about marketing at all.

The certificate precisely regulates various details:
* the title applies to quarries around Arudy, Bescat, Louvie-Juzon (64) and
* for processors in the regions of Pyrénées-Atlantiques (64), Hautes-Pyrénées (65) and in 196 municipalities in the region (40). The numbers in parentheses indicate the respective departments.
* Responsible for the “organization and protection“ of the title is the Natural Stone Federation of the Nouvelle-Aquitaine region, the documents say.
* Currently, the seal applies to 8 companies with about 40 jobs and an annual turnover of € 4 million.

France thus attaches importance to protecting its small and medium-sized enterprises (SMEs) and their products.

The IG is also of value to consumers, as it provides them with orientation at a glance. 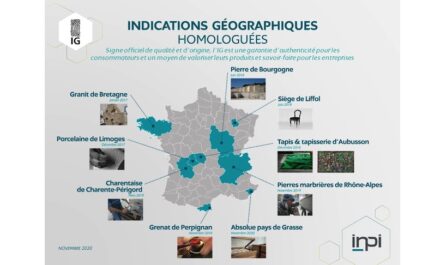 Before the Pierre d’Arudy, 3 natural stones had obtained the seal: the Granite de Bretagne, the Pierre de Bourgogne and the Pierres marbrières de Rhône-Alpes.

Among the other products, currently 12 in total, that have won the title so far, you can find, for example, the linen from the Basque Country, the base material for perfume from Grasse or carpets from Abusson.

Another initiative for the protection of natural stone came from the European Commission a few years ago. Unlike the IG, however, this was about protection that would apply to the entire European Union. We will report soon on the current state of affairs.

A – different – initiative on the part of geologists also offers a tool for marketing: with the title “Global Heritage Stone Resource”, stones can be certified which played an important role worldwide in the past and which are still quarried today.