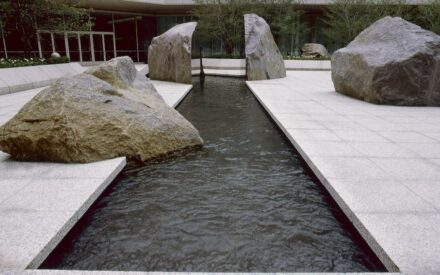 A solution has been found in the conflict about the demolition of Elyn Zimmerman’s work Marabar in front of the National Geographic Society’s (NGS) headquarters in Washington DC. The famous installation of twelve reddish granite boulders of varying dimensions along a 60-foot-long water feature from 1984 will be moved to a new location and reinstalled at NGS’ expense.

Dubai‘s area used for hotels and tourist activities will increase by 134%, according to the 2040 urban development plan launched by Sheikh Mohammed. Green and recreational spaces and areas dedicated to public parks are to double in size.

Registration for Marmomac (September 29 – October 02, 2021) is open. New is Marmomac Plus, a virtual space to provide „publication and promotion of registered companies on all our media channels,“ as said on the webpage.

Stonemasons in Pittsfield, Il, say that the Covid-19 pandemic is causing a shortage of granite. They had to wait weeks for the stone they ordered, according to a report.

An Italian webpage has compiled kitchen-mortars made of natural stone.

Japanese art student Hama crafts sushi-like pieces from natural stone. No color was used, is said in a report on Designboom.

A statue of Thomas Jefferson and seven granite or marble busts were affected during the mob’s attack on U.S. Capitol on January 06, 2021. They were exposed to a fine powder from a fire extinguisher that contained a slightly acidic mix of ingredients that included silicone oil and yellow dye.

The British Natural Stone Industry Training Group has launched its “Women In Natural Stone“ working group to highlight the roles and training needs of women in the stone sector (1, 2).

British Prime Minister Boris Johnson ruled out the return of the Parthenon Marbles to Greece, insisting the objects were legally acquired by Britain.

Welsh writer Ken Follet donated the full copyright of his e-book “Notre-Dame” to restore the cathedral of Dol-de-Bretagne, Fondation du Patrimoine announced. The sum of 148,000 € will go to the church in Ille-et-Vilaine being under restoration. Originally the royalties from the e-book had been planned for Notre Dame after the fire, but in consensus with the heritage foundation, another option was found (French).

Video of the month: The Swiss company Ongaro Graniti shows how it blasts 4500 tons of its Creciano gneiss out of the mountain after the winter break.