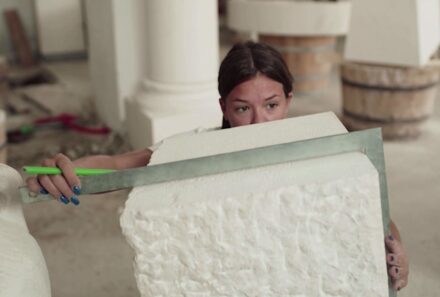 The stonemasonry school on the limestone island of Brač in the Croatian Adriatic Sea has put a video online. Unfortunately, it is only in German language but it gives an impression of the site and the stonemasonry training there, which is equally accessible to Croatians as well as to young foreigners.

The fees for the workshops and for accommodation and meals in the school dormitory can be obtained from the school’s head, Tamara Plastić (see mail-address below).

For the three-year stonemasonry vocational training, EU citizens do not have to pay any fees. They can live in the school’s dormitory (accommodation and food for € 200 per month).

The past years have shown that basic Croatian language can be learned quickly and that students also get along well with English. If there is a group of foreigners, a translator will be organized, says Tamara Plastić.

The pure white limestone from the island has been quarried since the Romans. The school named Klesarska Škola celebrated its 110th anniversary in 2019.