Turkish natural stone exports in 2020 were negative compared to the previous year, but positive developments could also clearly be seen 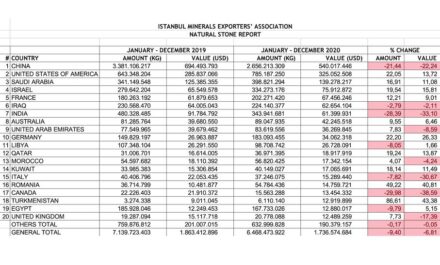 Block exports to China collapsed by -22% by value due to Covid-19, but there are strong increases (almost) everywhere in deliveries of finished products

The Turkish natural stone industry has come through the Covid-19 crisis relatively well – at least in 2020: Exporters recorded a drop of (-)6,81% by value and (-)9,40% by tonnage compared to the previous year. These figures emerge from the statistics of the Istanbul Mineral Exporters’ Association (IMIB).

And: current data also confirm that Turkish companies are on a good track to improve the value added from the country’s mineral resources.

A closer look at the current figures:
* that shipments to China would plummet dramatically (by value by -22.24%, by tonnage by -21.44%) was clear. China had stopped its purchases all over the world in one fell swoop in the first months of the year. Turkey exports a large part of its blocks to China.
* From about May, China resumed its trade with the world, but that led to a shortage of containers and rapidly rising prices in shipping, which also affected Turkish block shipments to India.

The significant 2020 slumps cannot therefore be blamed on Turkish companies.

In contrast to this, however, something else must be positively recorded: there were outstanding increases in the exports of end products, as already mentioned! Here with the USA, Saudi Arabia, Israel and France after value increases between +9 to +13,7% were reached. This despite the crisis.

Turkish travertine overtook the country’s marbles: according to more detailed statistics we found in the national magazines Turkish Stone World and Marble Trend, there was an increase of +2.24 by value (+5.46% by tonnage) for marble end products, and even +22.07% by value (29.98% by tonnage) for travertine.

In general, it can be seen that it is equally countries of both the Muslim and Christian worlds where Turkey has placed well as a supplier of higher value end products. In this regard, the government’s political disputes with some countries have not been reflected in 2020 stone exports, such as in the case of Saudi Arabia or Qatar. But that could still change, as the first data for 2021 suggest.

The 2020 increase of +26% in the case of deliveries to Germany is likely to be due to individual projects, as is the slump in deliveries to Canada (-39%).

The slump to Italy (-31%) is again a direct result of the pandemic, as Italy buys plenty of raw blocks in Turkey and brings them back to the market processed.

In an interview with Turkish Stone World, IMIB President Aydin Dinçer outlined the priority objectives for 2021: “There will be virtual visits by delegations to Egypt, Jordan and Algeria, also to the UK. This will be followed by delegations to Bangladesh and Taiwan, as well as Russia. “ There will be real participation in trade shows in the U.S. and Italy.

Overall, he expects renewed export increases in 2021 because many customers are running out of stock.