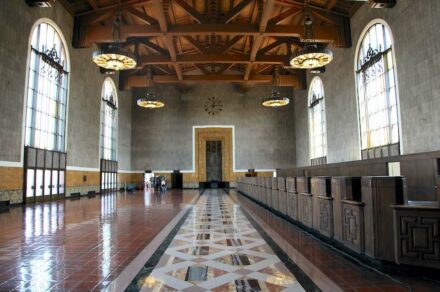 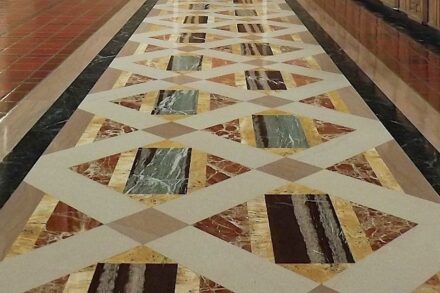 Unlike other cathedrals of transportation, at Union Station, marble and other stone varieties only accentuate, show less opulence and wealth

A gem among stations from the great era of U.S. railroads is Union Station in Los Angeles, which was the setting for the 93rd Academy Awards ceremony in April 2021. Inaugurated in 1939, its architects were father and son John and Donald Parkison.

The design of the large halls is particularly striking. Natural stone was not used here in abundance, as in other stations of that time, as an expression of wealth and elegance, but as a striking architectural accent. 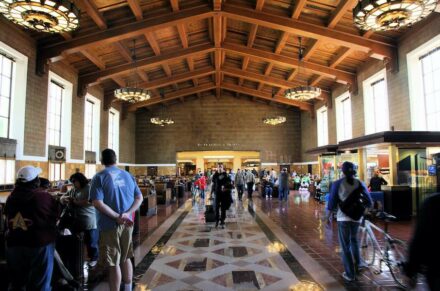 Thus, a mosaic of marble and other natural stones runs as a 4-m-wide centerline through the halls with the waiting room and ticket counters. In practical terms, it is an unmistakable orientation for travelers. All around, the floor is covered with brown terracotta tiles.

The walls have a 3 m high cladding. In the lower part, it is also a natural stone mosaic made of marbles from Belgium. Above is a band of polished travertine that rises almost to the sky at the front sides. US firm Gladding McBean had created the mosaic.

The focal point of the Oscar ceremony is the hall with the ticket counters. It reaches 19 m in height, and the windows are 12 m high. The cassettes at the ceiling appear to be made of wood but are of steel.

In the recent past, the ticket and the waiting hall often served for film shootings. Successes such as Blade Runner or The Way We Were were filmed in the station.

During the Oscar festivities, which began at 5 p.m. local time and lasted late into the night, train and subway service remained in operation at the station. 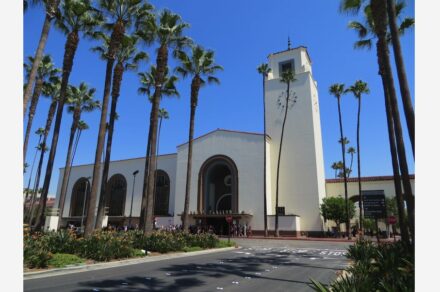