Art installation on Stanford University’s Science and Engineering Quad: like a playground for thoughts with 12 oversized marbles made of colored stones 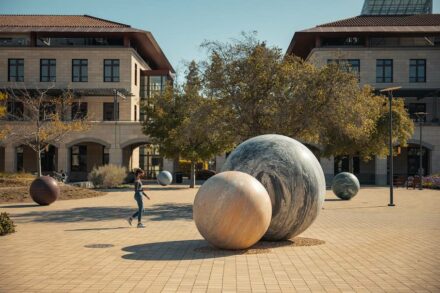 An art exhibition that includes a geological glossary of the types of stone used? That is possible at Stanford University’s Science and Engineering Quad: there, twelve dazzling stone spheres named „Pars pro Toto“ by international artist Alicja Kwade have been installed, ranging in diameter from a diminutive 16 inches (40 cm) to a colossal 98 inches (2,50), and all made of colorful natural stones coming from 8 different countries.

They stand for the worldwide reach of science while the quad arrangement of several institutes‘ buildings has the aim to bring together disciplines formerly scattered across the campus. Communication, inspiration, and innovation are in the focus of the artwork and of Stanford’s School of Engineering, also a deep respect for nature and human creativity.

Alicja Kwade explains: “The work is a threefold reflection: It allows us to become giants roaming a human-scale solar system, but it also reminds us to be dwarfed by the ever-expanding universe. We become aware that our Earth is but a minute sphere, a marble suspended in our geocentric horizon.” The artist is well known for space-like installations,
The positioning of the globes was determined by chance: The artist threw tiny spheres onto a model of the Stanford Science and Engineering Quad to dictate placement. This gesture implies a higher being playing marbles with these planet-like spheres, creating a new universe. The arrangement also references billiard breaks, a real-world action used to visualize quantum analogs. 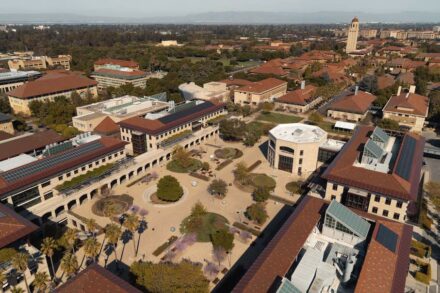 The natural stones come from three different continents of the Earth. The material of the stone itself, with layers that have formed over billions of years, acts as a kind of timescale. Each corner of the world and layer of Earth yields a multitude of stone varieties, colors, and textures so that no two stones are alike. True to the meaning of the Latin phrase pars pro toto – “a part for the whole” – the stones individually and collectively evoke the micro and macro scales of our existence.

At the bottom of the webpage can be found a glossary with geologic definitions and descriptions written by Donald R. Lowe. The Max Steineke Professor in Stanford’s School of Earth, Energy & Environmental Sciences explains with a few words scientific terms like Igneous rocks, Sedimentary rocks, and Metamorphic rocks. Each of the stones used by the artists has a piece of information telling where it comes from, how old it is, and more. 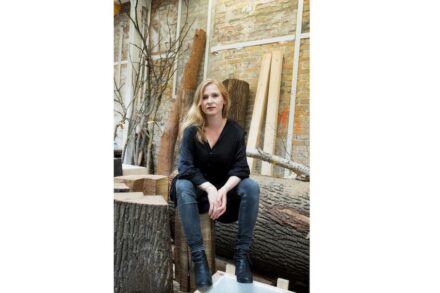 Alicja Kwade was born in 1979 in what was then communist Poland and escaped with her family to West Germany when she was 8 years old. She studied at the Berlin University of the Arts. Her experience on both sides of the Berlin Wall deeply informs her investigations into the structures of our reality and the role of perception in society. Her diverse practice is based around concepts of space, time, science and philosophy, and takes shape in sculptural objects, public installations, video, and photography.

Also at the bottom of the web page, some information about the Berlin-based stonemason Frank Rüdiger who processed the stones selected by the artist.

Like other recent public art projects on campus that have been underwritten by private donors, „Pars pro Toto“ was funded by a Stanford alumni family who are long-loyal supporters of the university.

Please note: due to Covid-19, Stanford’s Academic Campus Zone is restricted to students, faculty, staff, and postdoctoral scholars approved to be on campus.