Stone detail: the travertine handrails in the renovated Manhattan Center in Brussels 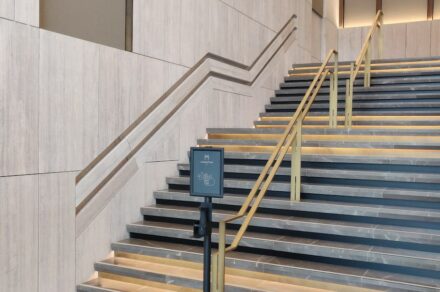 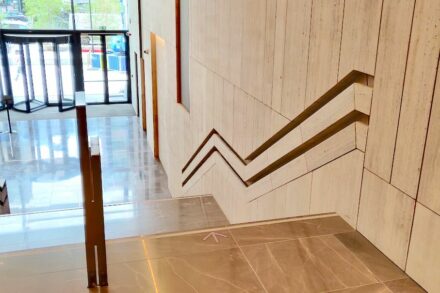 In a new series called “Stone detail,” we are adding a detail to our reports on a major architectural project. This time it is about the handrails in Brussels’ remodeled Manhattan Center:

Architects use such handrails to bring a sense of elegance and specialness to a building.

Recessed in the wall, the handrail emphasizes an overall appearance of a sleek wall surface.

In addition, the handrail also functions as orientation – the visitor recognizes at first glance where in a room the stairs are located.

The fact that there is a separate handrail for children is a result of the regulations. It is repeated in the metal railing in the middle of the staircase.

To mention the haptic effect of such a handrail right away, in addition to the visual one: stone feels good – it seems to create a feeling of well-being in the nerve cells of the skin. This feeling is hightened when the stone is round and can be grasped with the entire palm of the hand.

The technical challenge of such a handrail is the production of the individual elements. They run at an angle and must be cut accordingly with precision. The smallest deviations from the straight line would be seen here immediately. 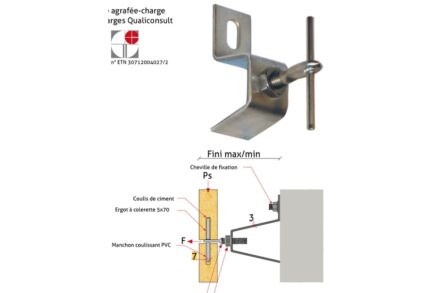 The anchoring in the wall is standard: it is realized here with a dowel anchor / plug anchor with mandrel bearing, that is: the anchor is inserted into the wall with a dowel (instead of mortar), the stone itself is held in place with a mandrel. 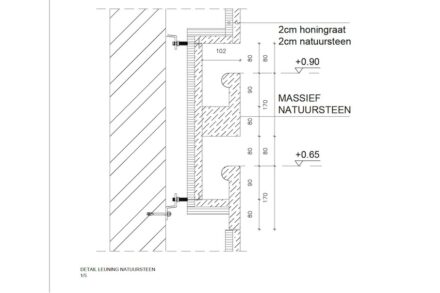 Figuratively speaking, the handrail is inserted into the wall, conversely, the rest of the cladding is moved forward.

Their attachment is now made with longer anchors.

It should be mentioned that the stone slabs are reinforced at the back with a honeycomb structure. This is related to the staircase as an escape route: so that in an emergency someone is not pressed, for example, with his shoulder against the wall cladding and a slab cracks and falls down, the back is extra stabilized.

A central task is the care of the stone from the very beginning. This includes impregnation against water and against grease (hydrophobic and lipophobic).