For the conversion of the Manhattan Center in Brussels, the traces of the plans for a car-friendly city had to be removed from the high-rise building 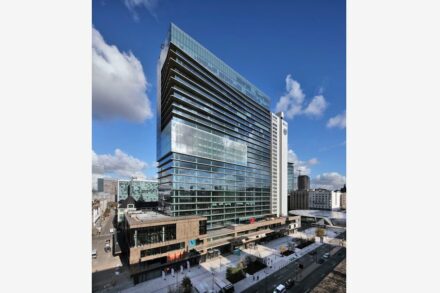 The new Manhattan Center in Brussels’ Quartier Nord, the city’s most important business district, has stood there since 1973, and yet hardly anyone will remember it. Although it is around 100 m high and a huge building, it has simply never been seen. In recent years, it has been remodeled inside and out and converted for a variety of uses.

The central task of the architects was to eradicate the traces of former urban planning from the high-rise building. For it was conceived as one of a total of 78 high-rises for the business district in a car-oriented city: thus it was originally to have a base, to which a system of elevated walkways and bridges for pedestrians would link above the car traffic.

However, when the oil crisis hit in the mid-1970s and many citizens resisted this idea of a city, the plans quickly came to an end. 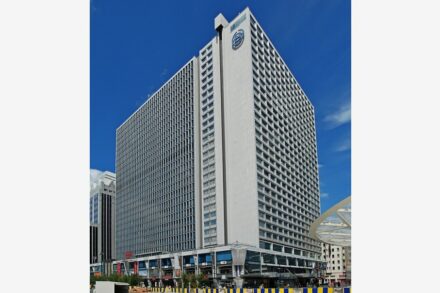 Not without a trace, because our high-rise building had been struggling with it ever since: there was no recognizable entrance on the first floor – a central reason why it had never been recognizable.

The new owner, ICON Real Estate, set the goal far for jaspers-eyers Architects: the remodeled building was to be a highlight in modern Brussels in the future, thus becoming interesting for financially strong tenants, also bringing life into the district and, last but not least, achieving the best energy values.

It should be noted that only a conversion was planned, not a new building. 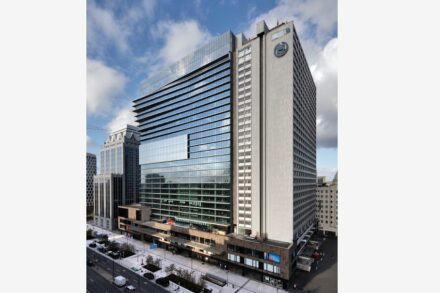 Nevertheless, as one of the measures, the architects took the shape of the building as such. On one side, the strict rectangular edge was abandoned and pulled forward at the top. The planners hoped that this would visually open up the high-rise building to the public street space.

There was also such an extension at street level, namely at the base.

As is common today, numerous functions have been integrated into the former hotel high-rise: one now also finds offices, stores, bars, restaurants and a fitness center there. In part, these uses are reflected in the facade: halfway up, a winter garden is clearly set off over 4 floors. On the roof, 2 additional floors with a terrace were added. 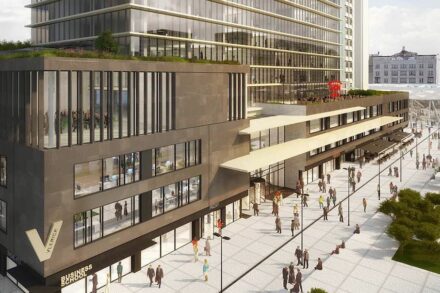 The base has also been made accessible to visitors: there is now a long café there, as it might have been in the seventies.

The entrance is clearly visible cut into the facade (which is unfortunately not visible in our photos). 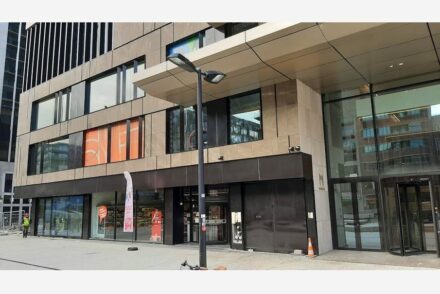 While in the upper part of the building glass is the material of the cladding, in the base it is the light travertine Vallanca. The stone is intended to ground the high-rise building, so to speak. 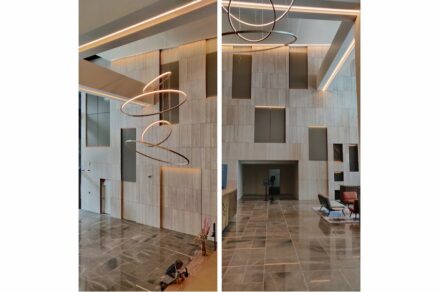 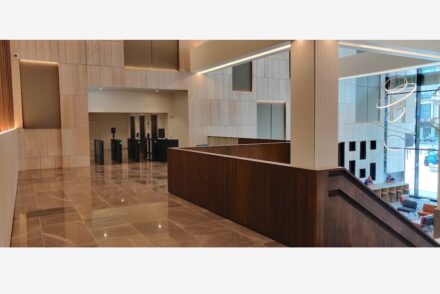 It is found on the walls in the entrance hall, here together with the darker Mystic Brown marble on the floor. Both have different shades of brown and different surface textures – here, too, the architects relied on contrast as an invigorating element.

The handrails in the travertine deserve a special mention. We deal with them in a separate text.

The natural stone was supplied by the Spanish company Levantina. The installation of the stone was taken care of by the Belgian Opus Marble.

Today, the building has a total of 28 floors above ground and 6 underground. The surface area is now 68,000 m². It carries the BREEAM Excellent certification.

One of the new tenants is Vlerick Business School. It is considered one of the best private business schools in Belgium, and is expected to contribute to the life of the building on the one hand, and attract high-caliber companies to its offices on the other.

Another new tenant is an international law firm, wrote the business newspaper L’Echo: the firm wanted the Manhattan Center to offer its employees a similar working environment to that at its headquarters in Washington, D.C..

But actually, the text continues, the new owner of the Manhattan Center wants to bring the firms’ headquarters to Brussels, not just their branches.