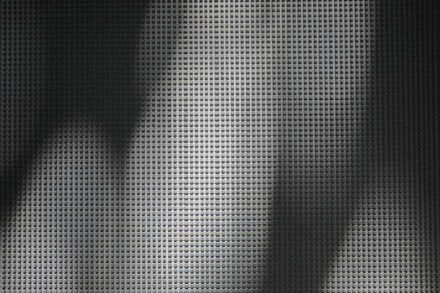 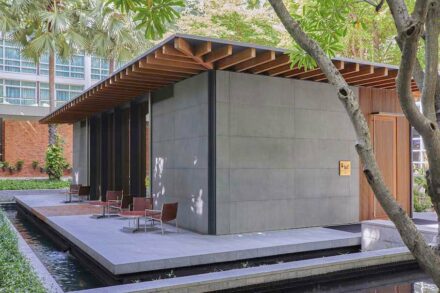 Hotel guests might almost think the low pavilion behind the Pullman King Power Hotel, Bangkok was a weekend cottage, so unobtrusively does it squeeze into the tropical park amid the multi-story facades. However, it is home to the Tenko Omakase Restaurant – one of the top Japanese cuisine establishments in the Thai capital. The pavilion is a simple rectangle with a projecting roof and walls made of natural stone and glass – the stone masonry has just been awarded one of the Pinnacle Awards of the US Natural Stone Institute 2020. They were executed by the Thai Stone and Roses Company. The head of the company is Philippe Narbonne, a native of France.

There is more to the design than meets the eye from a distance. Just as there is with Omakase. 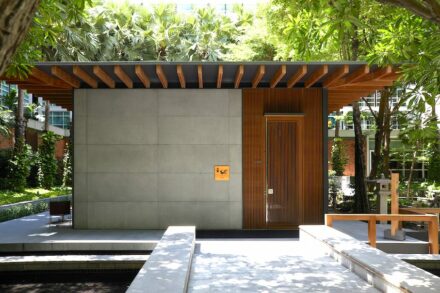 Wood, stone as well as around and above it the green of the plants determine the picture. On one side, a long glass front opens the restaurant to the courtyard. Around the pavilion, however, there is a narrow pond with Koi carp, which visually separates it from curious visitors. 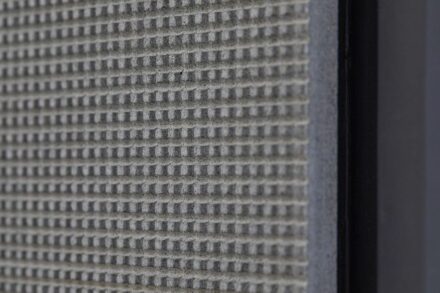 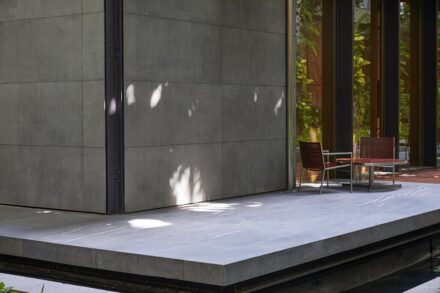 It is the special surface in the basalt slabs of the outer walls that give the cottage its expression. One description says: the structure of the stone is reminiscent of the armor of ancient samurai fighters. This is reinforced by the iron posts that hold the building together. 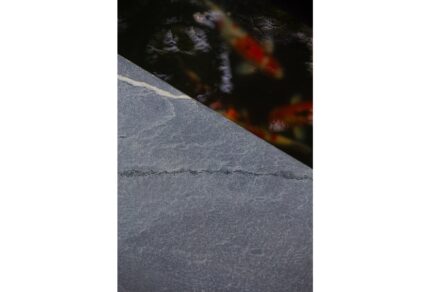 The flooring also has durability and stability as its expression: the slabs of gray quartzite with their distinct white veins protrude out onto the water.

The surface of the wall panels is designed with the structure “Texture D“, which highlighted the jury of the Pinnacle Awards: The regular pattern adds warmth and movement to what is actually cold stone. This can be seen particularly beautifully when light and shadow move across the walls as the sun moves. In a separate article, we quote Philippe Narbonne’s interpretation.

The jury praised the high level of technical expertise behind “Texture D“: “The Controlled execution of the texture application is spectacular.“ Because in the alternation of heights and depths, one sees every inaccuracy on such surfaces. The know-how also includes the selection of the right type of stone for such design.

This project was initiated by late K Vichai Srivaddhanaprabha chairman of Kingpower. He selected the material himself and liked the texture because it reminded him of Samurai’s armors. 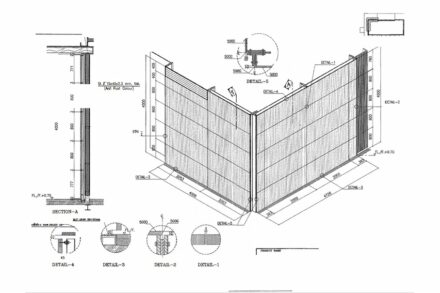 The fact that the pavilion, in keeping with Japanese tradition, focuses on natural materials is also emphasized on the websites of the posh hotel. “The interiors are in neutral colors with dark wood, cream and gray hues and soft lighting,“ it says.

Guests can sit around the kitchen, as is customary at Omakase, and see the chef in action. There is also a separate area with tables and chairs.

The tableware comes only from studios with well-known names. Many of the pieces are only available in limited editions. The same goes for the glasses.

There are only 10 seats in total, which are given out in 2 rounds per evening. This is so common at Omakase, as is the fact that there is no menu, but the chef decides what to prepare. This is usually done in 12 courses, which can include very different preparations, and which necessarily include a taste surprise as the highlight.

The “Tenko“ in the restaurant name stands for “Heavenly Fox“ and refers to a chef who has really made it to 1st class chef.