As Notre Dame is being rebuilt, replacement stones that may be suitable are now going through laboratory testing 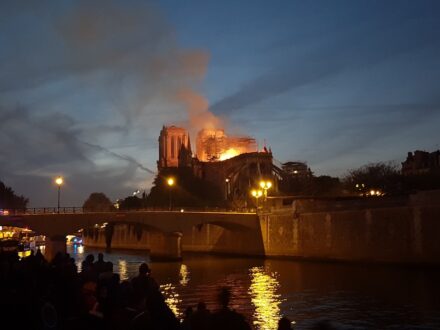 By mid-2021, preliminary scientific work to replace the destroyed masonry bricks from the devastating Notre Dame fire on April 15-16, 2019, should be complete. Appropriate materials have been sought since July 2020, and laboratory tests have now begun in January 2021.

The challenge is not only to locate varieties for reconstruction that are as close as possible in appearance and properties to the old materials. This time, it is also a question of providing large quantities, far more than have been continuously demanded to date for the preservation of the structure.

The starting point for this stone search is actually favorable: In the past 50 years, in the course of the continuous restoration, detailed analyses had been carried out to determine from which quarries under Paris and from the nearby surroundings the limestones for the respective construction phases from 1163 to 1345 and for the major restoration from 1844 to 1864 had come.

In the meantime, 30 active quarries and 20 out-of-use quarries have been identified that could be suitable for the supplies now needed, the trade journal Pierre Actual wrote in an article in its January issue.

The National Geological Service (BGRM) is leading the scientific work, along with other institutes. There is an overview on the BGRM webpage: “The original stone was extracted from the subsoil of Paris. It consists of limestone of the Lutetian age, a geological stratum formed 41 to 48 million years ago. There are outcrops of this type in many parts of the Paris Basin … Building stone is still excavated today in about ten quarries north of Paris, and in the Oise and Aisne departments. The Lutetian limestone results from a complex sedimentation process, which will be explored as part of the programme signed between the public body and BRGM to identify the characteristics of the stone suitable for restoring the cathedral.“

About the fractures in the Parisian underground, it should be said that they were once located outside the walls of the city. Today, they belong mainly to the 12th arrondissement and are among the tourist attractions as catacombs. One of the permanent tasks of the BRGM is to keep an eye on the stability of the caves.

An overview of the most serious stone damage after the fire is given by Véronique Vergès-Belmin of the Centre de recherche sur la conservation in the proceedings of the 14th International Congress on the Deterioration and Conservation of Stone: “Three masonry areas in the upper parts of the building were directly subjected to fire: the drip walls supporting the roof frame, the gable walls closing the attic and finally the vaults… Two pillars were also impacted near the ground after the collapse of ablazed beams trough the punctured vault of the nave. The fire damaged masonries show red, black and white discolorations, accompanied or not by inner cracks and bursting of their fired surface … The visually observable damage depth locally reached 20 cm. Stone fragments several decimeters in size continued to detach after the fire.“

Besides the new stones for Notre Dame, the search also revolves around large quantities of oak wood. As in the Middle Ages, trees of a certain thickness are needed. About 2000 oaks are to be felled for the reconstruction, 1000 of them this year. This is about 0.2% of the annual harvest of this tree species, as the Ministry of Agriculture writes on its webpage.

The famous crossing tower, which architect Eugène Viollet-le-Duc had added to the roof of the medieval cathedral only in the 19th century, and which fell burning into the depths in the inferno of flames, is also to be rebuilt true to the original. A lot of wood is needed for it.

There has already been prompt criticism from activists, who have already started an online petition against the felling of old tree giants. They want modern building materials to be used for the reconstruction and for the centuries-old plants to be left untouched as “part of our heritage and an ecosystem in their own right.”

The reconstruction will also be the main topic at the Rocalia trade show in Lyon in December, as announced in Pierre Actual.

Proceedings of the congress “Monument Future – Decay and Conservation of Stone”