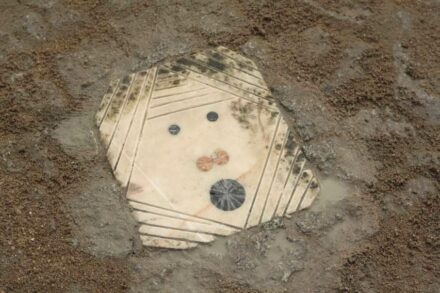 The Portuguese city of Évora not only has an old town that is a Unesco cultural heritage site, but is also home to the choral singing Cante Alentejano, which has the rank of Intangible Cultural Heritage. Now, the town of about 50,000 inhabitants also has its own Rolling Stones, and one suspects that the title here is meant ambiguously: it is not at all about the rock group from England, but about real stones that take up the Alentejo’s long tradition of stone sculpture – the “Pedras Rolantes“ are flat works of art made of stone, comparable to thick tiles that are set into the pavement of squares and streets.

The idea comes from Bernardo Bagulho, realized in cooperation with the association Pó de Vir a Ser, a center for sculpture with stone. His first works were laid in the old town in 2019 – this happened as part of the cultural festival Artes à Rua – translated roughly as call for “Art on the street!“. Meanwhile, there is a 2nd laying action, and thus 13 works inside the city wall and 14 outside plus in addition as an orientation for locals and tourists a special city map.

Because it has been shown that many people are enthusiastic about the idea and like to roam with the view towards the ground through on the place.

We note: Children love to walk the streets virtually blindfolded. Apparently, there is much more for them to discover there than in the shop windows at adult height. 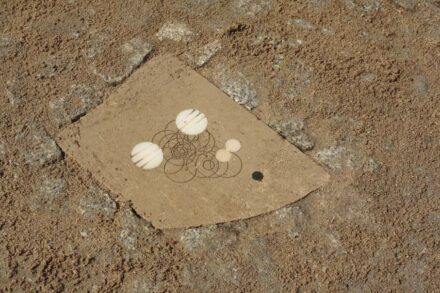 Bernardo Bagulho puts faces on the sidewalks in his tiles – the works can also be seen as masks. For this, he uses leftover pieces from the work of the other artists in the Pó de Vir a Ser association. In the surfaces he mills lines or inserts other stones with different colors.

One can recognize actual personalities from the city life, according to the Association’s web page. 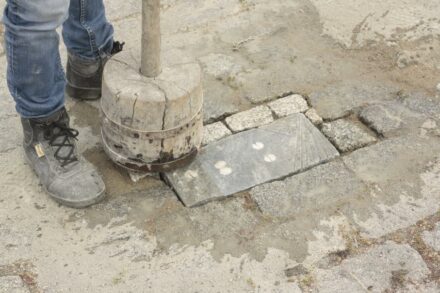 The initiators emphasize that the “mestres calceteiros“ are also involved in the work, namely in the stone laying. These are the pavers who keep the tradition of the Calçada Portuguesa alive. The Rolling Stones from Évora need the hand of an expert, so that they do not come loose too quickly from the bond of the small stones around them.

The artist Bernardo Bagulho comes from Évora. He studied design at the university there, got a diploma in illustration at a college in Barcelona and from 2018, back in Évora, was introduced to art with natural stone at Pó de Vir a Ser. 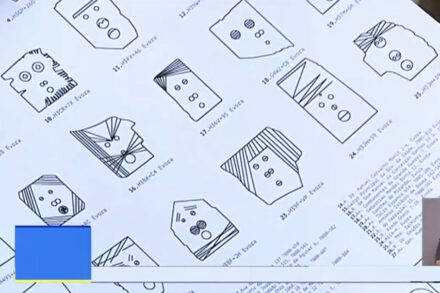 A word about the association: it resides in a former slaughterhouse and “works to make scultpure soemthing for everyone,“ as it says on the webpage. The name Associação Pó de Vir a Ser itself has something playful: it can mean “Association Dust of Becoming“, referring to the flour from the processing of stone, or simply “Association Can-Be“. 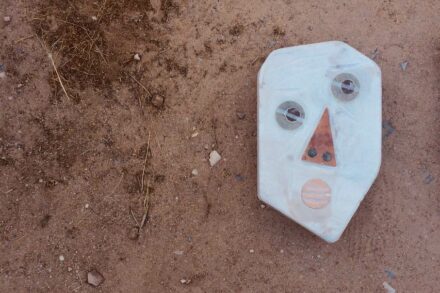