Pierre Actual reports on the work of stonemason-restorers in the reconstruction of Notre Dame: “far more than just a new professional experience“ 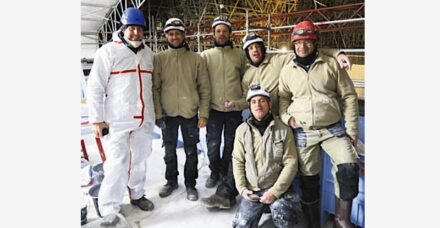 After the phases of inventory and safeguarding, the actual renovation will begin in winter 2021

On the night of April 15-16, 2019, there was a devastating fire in the roof truss of Notre Dame. Two years after the disaster, the June issue of the French trade magazine carried a report on the work of the stonemasons up to that point. We publish the report in a highly abridged version, with the kind permission of the editors. In the long version it can be downloaded together with an article about the 3D modeling (see link at the bottom).

People know each other among stonemasons in France, of course, and so around April 28, 2019, on a Sunday afternoon a few days after the fire, an email spread through the restorers’ networks: “We have to be in Paris tomorrow to assemble teams of stonemasons for Notre-Dame.“ It originated with Didier Durand, then head of the Pierrenoël restoration company, which had been working at Notre-Dame before the fire.

After a short night, a number of stonemasons were on site for restoration work on Monday. So that the entire stone sector would not immediately set out, the circular had been limited to the circle of real experts.

One of them was Régis Deltour, head of the company Mollard Deltour, an old acquaintance of Didier Durand. But while Durand did not have far to go from his company headquarters in Boulogne-Billancourt to Paris, Deltour had rushed over from La Biolle on the Swiss border in the course of the night.

Pierre Actual describes the inventory of the stone specialists when they entered the vaults after the initial horror had subsided: “It was like entering a history book! We got into places where perhaps no one had been for centuries.“

In the weeks that followed, their tasks included taking stock of the damage the fire had caused to the limestone masonry.

One detail to remember: the entire interior of the church was contaminated with lead, which had been spread everywhere by the conflagration. The site of the accident could be entered only with protective suits. After 2 hours of work, half an hour of rest, including a shower, had to be observed.

Sensors detected any movement in the masonry during this phase – if they sounded the alarm, everyone had to get off the scaffolds and out immediately.

The rules were rigid – they didn’t want any heroes of Notre Dame.

One of the problem areas of the ruin were the lateral buttress, which, in the Gothic style, transferred the load of the central nave to the outer pillars. They were reinforced with wooden structures, for which, in turn, smaller granite blocks were used as abutments.

Many of these materials were ordered in the afternoon and arrived at the construction site the very next day from a completely different corner of France – throughout the country, citizens activated all resources, one can read between the lines in the report in Pierre Actual. 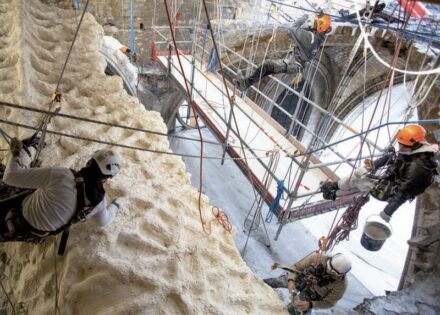 This also applies to the more than a dozen stonemasons, from whom a hard core had formed in the meantime. They had initially abandoned work in their home firms, then reorganized and shifted from commuting to permanent presence in Paris. One thanks his clients: “They were very understanding when we wanted to put their orders on hold in favor of Notre Dame.“

Much of the work in the months that followed involved vacuuming the fire dust from the cathedral’s interior. Much media attention was given to the dismantling of the steel framework, whose 40,000 or so individual tubes had been completely deformed in the fire and were now being cut away piece by piece.

One of the tasks of the stonemasons was to take the sculptures down from the walls and secure them. Later, they worked on securing the stone vaults. Some of the work could only be done by specially trained restorers on climbing sites. They experienced the cathedral from a very unusual angle, Pierre Actual quotes one of them as saying: “Climbing in the middle of Notre Dame, with the birds all around us, was more than just a new professional experience.“

Overall, Pierre Actual sums up, what those involved felt at being part of the project “a great privilege.“ That even applied to the night work: “It was a luxury to be able to listen to the silence of Paris or to experience from very close up how the sun rises behind the towers of the cathedral.“

Reconstruction of the destroyed parts of the building is scheduled to begin next winter and be completed in 2024.