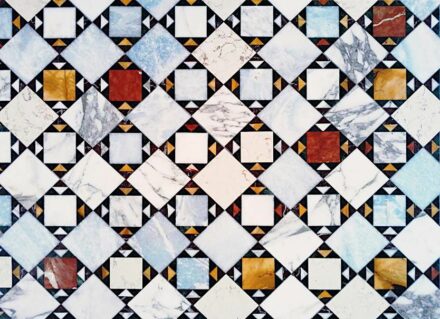 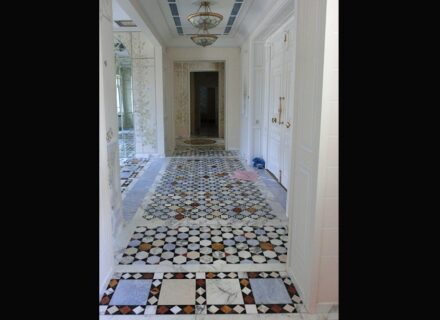 The Italian company Athena Marmi, located not far from Verona, made the puzzle with different types of marble in many colors and shapes

Athena Marmi, based in the Chiampo Valley not far from Verona, was contacted by a customer with a request that was unusual even for this company: he had spent a vacation in Rome, had seen the magnificent churches from the time of the popes, and now presented a picture postcard from the Lateran Basilica – he had fallen in love with the mosaic pattern of a piece of floor there and would like to have a copy of it for his villa in Ukraine.

The order sounds easier than it is on closer inspection: because it was less about a copy than about inspiration close to the original; after all, the villa had a total area of 250 m², but its rooms were cut completely differently from those in the basilica.

Athena Marmi accepted the order, what else? After all, a natural stone company usually only gets to do such a project once, which brings it very close to the art of the architects and stonemasons of the 12th and 13th centuries. 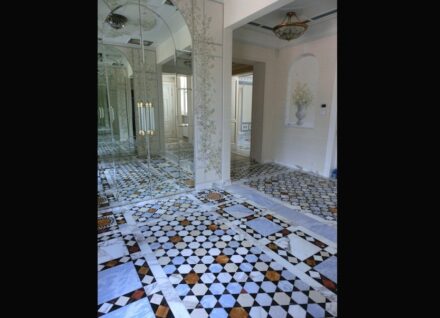 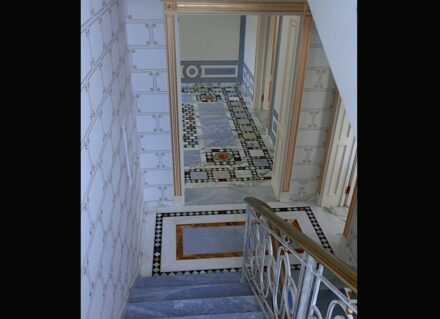 One of the challenges was to gather the stone varieties suitable for the color composition. In the end, the marble varieties Azul Noemi, Azul Emperador, Giallo Siena, Rosso Levanto, Bianco Calacatta, Arabescato Vagli, Bianco Carrara, Verde Guatemala and several more were chosen.

It was also important to ensure that the selected variety had sufficient hardness for use as a floor covering.

Special care was also required for the floor on which the mosaics were laid. Here, Athena’s experts initially encountered cavities in the screed on site, due to which cracks and therefore later damage to the stone mosaics were to be expected.

The client was persuaded by the company’s warnings, arranged for the floor to be renewed, and in the end was happy that he had taken the specialists’ advice.

Various patterns from the basilica were adapted to the conditions in the villa. The aim was to maintain the magnificent effect of the puzzle. 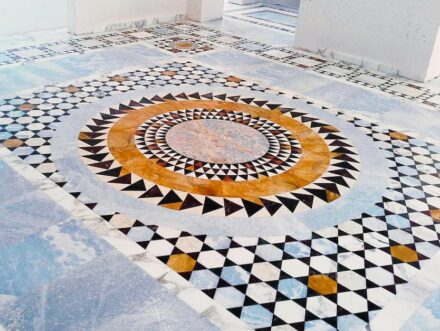 Let us take a look at the geometry: one of the attractions of such mosaic surfaces is that they are actually just variations of triangles, some of which appear alone and others in combination. If they are laid out with a single type of stone in a single color, they can also combine to form squares and hexagons.

Stars can also be seen.

Before laying, there were several steps: among others, the puzzle was laid out in the factory so that color differences between the design and the final product could be corrected. After all, one was dealing not only with the colors of the marble types, but also with their veins and structures, which in turn can influence the effect of the colors in a larger context.

Athena Marmi was busy with the project for about a year. At the end, the company’s specialists traveled to Ukraine to work with local craftsmen on the installation, joint treatment, and impregnation. We describe the details in a separate text https://www.stone-ideas.com/88053/marble-floor-end-of-work-cleaning-impregnation/. 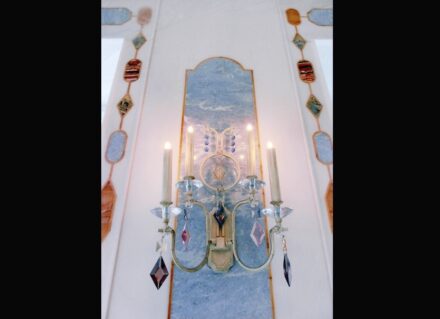 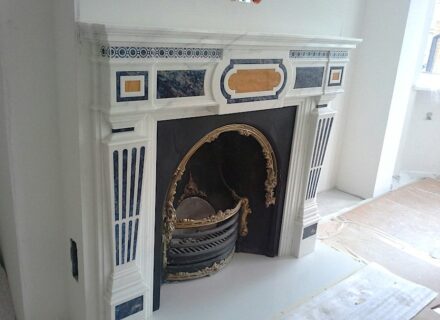 Special designs were also created for the fireplace and walls. Here, the gemstone sodalite was also used for the inlays.

Years after the completion, Patrizia Farinon, Sales Manager of the company, writes us enthusiastically: “What we had achieved is the result of the know-how of our workers and of our passion for the Italian art of marble processing.“

The Lateran Basilica (Basilica Papale di San Giovanni in Laterano) is the basilica of the diocese of Rome (with the Pope as bishop) and therefore occupies a special place among the churches of the city. It belongs to the Lateran, which is located about 5 km from the Vatican with St. Peter’s Basilica. For many centuries, the popes resided there. Until the 19th century, they were crowned in the Lateran Basilica.