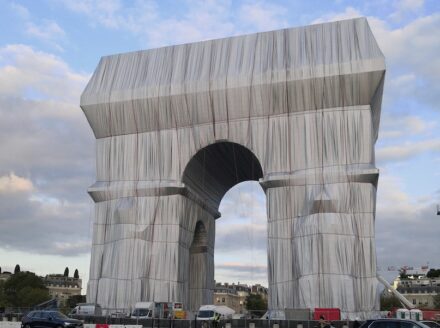 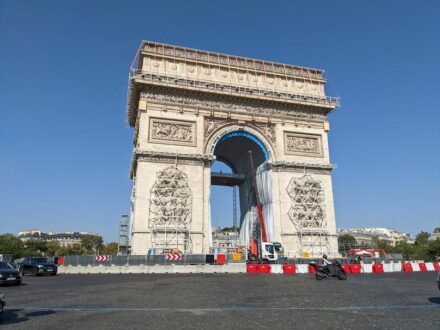 According to plans by Christo, the monument will be wrapped with sheets of shiny silver plastic from September 18 to October 03, 2021

From September 18 to October 03, 2021, the bright natural stone facade of the Arc de Triomphe will be hidden behind some 25,000 m² of a silvery blue polypropylene plastic with 3 km of red rope. Instead of the bulky monumentality of the structure, commissioned by Emperor Napoleon I in 1806 “à la Gloire de la Grande Armée“ (for the glory of the Grand Army), visitors will then be able to admire a lightweight object whose outer skin appears to have been folded by the wind, but which was actually planned in detail in advance by the artist.

Christo, together with his wife Jeanne-Claude, has not only played with the wind as a fundamental force of nature in many installations that have become famous. He also again pays tribute to light as a physical phenomenon that can hardly be understood: he makes sunshine visible by means of the shimmering surface of the fabric and thus achieves that it expresses itself in permanent change depending on the time of day.

In a certain sense, then, the two were descendants of ancient seafarers who could read the wind and the waves of the seas and who used the light of the sun during the day and that of the stars at night for navigation.

Christo died in May 2020, and specifically wanted the wrapping of the Arc de Triomphe to be realized under the direction of his nephew Vladimir Javacheff, even after his death. Jeanne-Claude had passed away in 2009.

Both had fought since the 1960s for the project on the Place Charles de Gaulle in Paris with the restless traffic circle around it.

There are many stories to tell about the natural stone on the facades of the Arc de Triomphe. It is the limestone Château Landon, in the generic term Pierre de Souppes. Its varieties come from the area around Souppes-sur-Loing, a town about 100 km south of Paris.

Initially, there was only the Loing River and the Seine as a water connection to the capital from there, later a canal was added.

The limestone was formed about 35 million years ago as a deposit in a primordial sea of the Eocene.

For the Arc de Triomphe, even its own quarry was put into operation, so much material was needed and so quickly it should be delivered according to the wishes of the emperor. The quarry master Joseph Combe from Souppes became famous at that time.

The limestone Château Landon itself, however, became famous less for the Arc de Triomphe than for the Sacré-Cœur Cathedral, and that because of its snow-white color.

The impressive building on Montmartre has never had to be cleaned on the outside since its completion in 1914.

This is due to a special feature of the stone: under the influence of rain and sunlight, a chemical reaction takes place in its surface, releasing calcite. This is deposited as a snow-white layer on the surface and is constantly renewed.

Upside-down world: with this stone, the typical black discoloration of the outer skin is only present in those areas that are protected from wind and weather.

It took about 7 months to sew the fabric for Christo and Jeanne-Claude’s project, and 3 months to pack and transport it. The installation of the fabric panels and ropes by industrial climbers was also meticulously planned.

“Arc de Triomphe, wrapped“ is succinctly the title of the project.

After 6 days of unpacking, the enchantment is supposed to be gone again.

Mining of the stones around Souppes-sur-Loing (French)