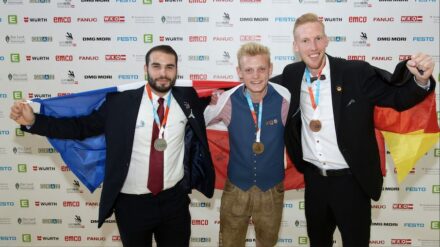 The competition was held in September in Graz / Next issue will be in 2023 in St. Petersburg

The EuroSkills championship 2021 was held in Graz in Austria from September 23 to 25. In this championship, young skilled workers have to complete a practical task at the highest level, under severe time pressure and observed by spectators. This time the winners in architectural stonemasonry were:
* Gold medal: Sebastian Wienerroither (Austria),
* Silver medal: Alexis Tatin (France),
* Bronze medal: Julian Wally (Germany).

The EuroSkills take place every 2 years, alternating with the international WorldSkills. About 400 participants from 48 professions came to Graz, 10 of which were hosted as presentation skills. The competitors came from 19 countries. In addition, 3 nations participated as guests (Albania, Thailand, United Arab Emirates). 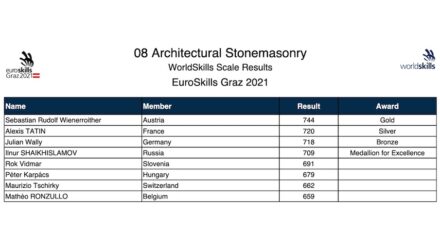 Participants are either trained professionals or graduates of a vocational high school and no more than 26 years old. This year had seen a change in the age limit due to the postponement because of Covid-19.

The fact that Austria regularly wins a medal in the stonemasonry competition has to do with the elaborate preparation. The central figure there is Bernhard Hasenöhrl, who prepares the candidates on behalf of the Steinzentrum Hallein (Hallein Stone Center). 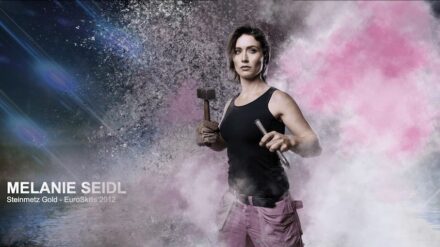 The Austrian Economy Chamber is also very supportive of the competition. For these EuroSkills it had released a poster campaign with the winners of the last years. They were called “Heroes“ – one of them was stonemason Melanie Seidl, who had won gold in 2012 and to whom the photographers had given a martial appearance.

This year’s gold medalist Wienerroither had already won the silver medal at the last WorldSkills in the Russian city of Kazan. The German bronze medalist Wally was previously a winner in the domestic competition “Die Gute Form“ (Good Forms).

This year, the leading medal winner across all trades was Russia. After the last WorldSkills had been held there – at the closing ceremony, even President Putin had shown up – the next EuroSkills will take place in St. Petersburg from August 16 to 20, 2023.

Yet in the coming WorldSkills there will be no more stonemasons involved because they had recently failed to gather the necessary number of teams from 12 countries.