Peter’s Corner on Marmomac 2021: the trade fair showed groundbreaking ideas for the future self-portrayal of the stone sector, but unfortunately also indecision on the important topic of sustainability 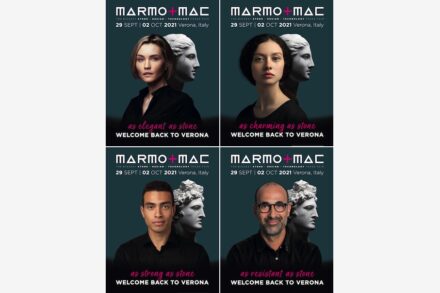 That was the most beautiful opening of a natural stone trade fair we have ever experienced. However, the reason for our enthusiasm is not the relaunch of the stone sector with a live event – Marble Izmir in August, Coverings in July and Xiamen Stone Fair in May had already experienced the new start.

The reason was 2 innovations that this 55th Marmomac (September 29 – October 02, 2021) brought to the stone sector:
* after the official opening with the usual speeches and greetings, not everyone ran away, but a soprano came to the podium and sang opera arias – she brought great emotion and drama to the fairground where business is the only topic. Such performances continued throughout the event and renewed the flash mobs held during Marmomac 2019. We admit: we were surprised and moved. After all, we had already raised the idea a few years ago that natural stone sells best with emotions;
* the cultural extension must be seen in the context of the poster campaign of this fair: everywhere on the fairgrounds and in the city were hung the faces of 4 young people with classical marble busts behind them.

This was forward-looking, forward-looking in that the stone sector has so far preferred to present itself with its big quarries. In the past, these may indeed have been good images for communication – but whether they still achieve their purpose in times of sustainability and climate change must be doubted.

Mind you, we are talking here about the images as they are shown on the websites of companies or associations, for example. We are not talking about the fact that a visit to the quarry deeply fascinates the guests.

The fact that this time Marmomac has tried its hand at both emotions and a new self-portrayal of the sector, both with success, justifies its reputation as the sector’s leading trade fair.

However: as far as the topic of sustainability itself is concerned, it failed almost completely. This had already been the case in 2019 and was repeated with the online lectures in May 2021: instead of playing the topic large in all its aspects, it only appeared in the program in passing.

This time there was at least one lecture on life cycle assessments – otherwise it was basta in terms of environment and climate.

A topic would have been for example the questions about luxury with stone, this because marble and all other kinds stand for luxury:
* How do you recognize luxury – is it luxury when something is wasted?
* Or can less even be more? But if so: how?
* Can elegance perhaps take the place of abundance?
* Finally: how can reduced quantities be compensated by price?

It should be noted that Italian companies have been dealing intensively with these questions for years.

And at the Marmomac, of all places, corresponding works were shown. Once again, we went into our archives and brought along a few examples: 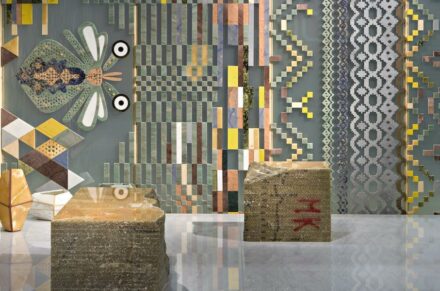 * as part of “Marmomacc Meets Design“ in 2011 (still in the old spelling of the fair), 10 years ago, the Spanish-Italian designer Patricia Urquiola played through for the company Budri, what can be done with the smallest leftover pieces from marble processing. It is necessary to know that Budri is one of the great Italian brands of luxury with stone, but luxury not in the sense of abundance, but of style; 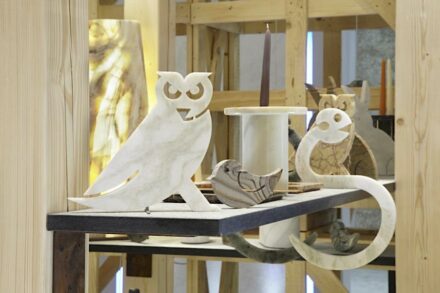 * the following year, also within the framework of “Marmomacc Meets Design“, the designer Tobia Scarpa came out with his collection “Animarmi“ of cute little animals made of stone waste. The client was the Testi Group; 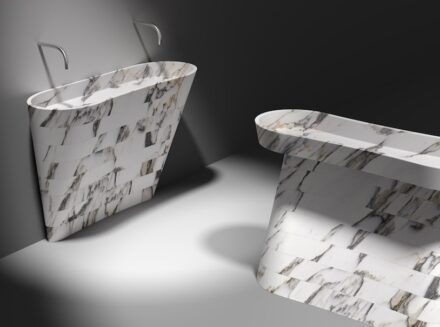 * in the years that followed, as part of the “Italian Stone Theatre“, industrial designer and mastermind Raffaello Galiotto had gone through several times how to create the most complete forms possible with the least amount of stone: In 2018 he showed “Tasca“, a washbasin with base, where each level emerges from the previous one… 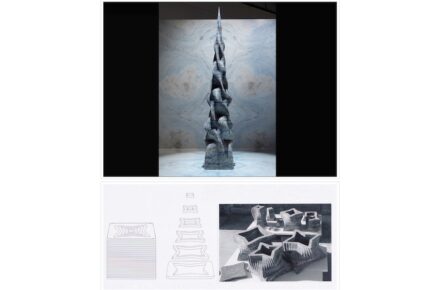 Music at Marmomac 2021, search for „Musical Interlude“ (the performance begins at approx. 9:30 after a commercial lead-in)