Miscellaneous: ideas all around rock and natural stone 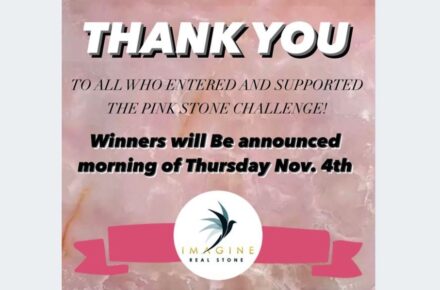 Pink Stone Challenge is a Social Media campaign and linked to the US Breast Cancer Awareness Month, which is held every year: everybody can take a photo of a stone with some pink in it and post it in the internet. The US-company Imagine Real Stone will choose 3 best photos and donate US-$ 1500, 1000 or 500, respectively, to the photographers‘ charity of choice. The winners were announced in the first week of November.

Shaping a Sustainable Future using natural stone is the topic of the online-seminar “Stone Digital“. On February 22 and 23, 2022, it will bring “the industry together to explore the possibilities and opportunities as we help the government achieve its Net Zero targets“, as said on the web page of media partner Stone Specialist.

In Cachoeiro de Itapemirim in Brazil, drug investigators have discovered large quantities of pure cocaine in bundles of natural stone slabs. The authorities warned exporters that they should take care of the problem. Otherwise, “repressive measures“ would be taken (Portuguese, 1).

“Stuff the British Stole“ is a series of ABC-radio podcasts about antique art which was brought to the UK during colonial times. One episode is about the Partenon marbles and a team of Greek-Australians fighting to bring those treasures back to Athens. Another webpage has arguments about why not return the so-called Elgin Marbles to Greece (1, 2, 3).

“How Much Do Granite Countertops Cost?“ is discussed on the Forbes Advisor webpage.

Chinese Open Architecture studio used reinforced concrete enriched with a rock aggregate for the new concert hall called “Chapel of Sound“ in a valley outside Beijing.

Aidia Studio for emerging architecture and design has presented a plan for the mosque in Preston, Lancashire, UK, where “reinforced ground natural stone“ may be used.

Galerie Lelong & Co in New York City has a solo exhibition of Spanish sculptor Jaume Plensa with works in alabaster, marble and steel, until December 11, 2021.

“The 5 senses of design” was the topic of a forum at Cersaie, trade fair for ceramics and bathroom furnishings 2021 (Italian).

Video of the month: Lake McDonald in the Glacier National Park is famous for the colored and shiny pebbles at its beaches. A video explains how they were formed (video, 1).