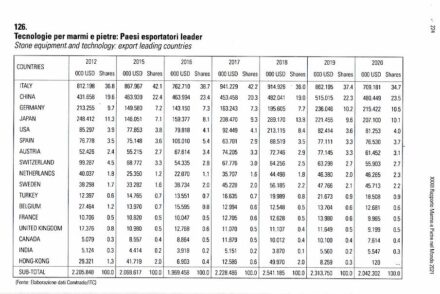 In Dr. Carlo Montani’s yearbook on the development of the stone sector, the consideration of the market for machines and equipment for the industry also takes on an important role. As in previous years, in the 2020 edition of his “XXXII Rapporto marmo e pietre bel mondo / XXXII marble and stone in the world“ the basic message is: Italy is the world’s leading nation in the technology sector.

Worldwide, technologies and equipment for the stone sector were exported in 2020, worth US$2.042 billion. Corona brought here a decrease of about (-)8% compared to the previous year. 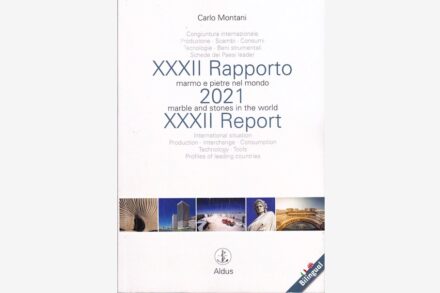 Let’s look at the imports of technologies among the major players in natural stone business in 2020:
* India imported goods worth US$108.1 million, actually putting a slight increase on the previous year’s 107.9 million. China dominates the Indian market with a one-third share of shipments from abroad. It is followed at a considerable distance by Italy (just under 10%) and far behind by Japan and Germany;
* China itself purchased US$361 million worth of technologies abroad in 2020. In terms of suppliers, Japan was in 1st place (147 million), followed by South Korea (55 million) and Germany (51 million). Italy ranked 4th with 34 million. Since 2007, China has reduced its technology purchases abroad by about a quarter (then: 474 million);
* Turkey imported technology goods worth just under US$46 million. Italy ranked 1st among suppliers (US$24.3 million), followed by China (US$12.3 million), Germany (US$5.2 million) and France (US$1.8 million);
* Brazil purchased machinery and equipment worth just under US$35 million abroad, the lion’s share of which was in Italy (US$10.8 million). This was followed by China (just under US$ 9 million), Germany (US$ 6 million) and France (4.7 million);
* 320 million worth of machinery and equipment was shipped to the USA from abroad. Of this, nearly one-third came from Italy (102.6 million), followed by China (81 million), Taiwan (28 million) and Germany (19 million).

The book “XXXII Rapporto marmo e pietre nel mundo 2021 / XXXII Report marble and stones in the world 2021” is bilingual (Italian and English), has a good 290 pages and was published by Aldus Casa di Edizioni, Carrara. It can be downloaded for 30 € as pdf from the publisher’s webpage.
Please note: the version for download on the webpage is still the 2020 issue of the book.