Dr. Carlo Montani: the stone sector survived Covid-19 almost unscathed, and something has been happening in the global stone traveling circus for some years now 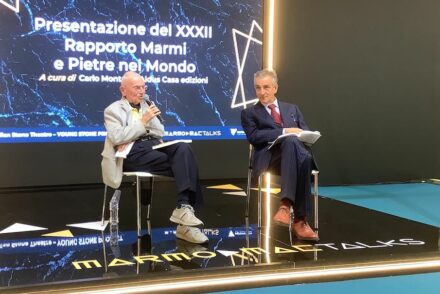 We had been eagerly awaiting Dr. Carlo Montani’s annual statistical analysis of the world natural stone market, and as expected, the grand old gentleman of numbers once again provided surprises during his presentation at Marmomac: His review of Covid-19 Year 2020 was unexpectedly positive, but at the same time he pointed out that something has been changing in the industry for several years. The yearbook is entitled “XXXII Rapporto marmo e pietre bel mondo 2021 / XXXII marble and stone in the world 2021“ and is üublished for the 32nd time.

The positive first. Although the pandemic brought individual industries such as tourism, restaurants, or theaters and cinemas to the brink of collapse, natural stone quarrying and processing escaped almost unscathed. The background to this is that construction activity worldwide continued almost without restrictions and that consumers in many countries embellished their homes with stone in the face of the lockdown. It was rather the transport that caused the stone sector concern.

At the same time, the 318 million t is the gross figure – only 91.5 million t ended up in products. Montani has been complaining for years about the high proportion of waste, or rather residual materials, which are waiting to be recycled. We will come back to this later.

As far as extraction is concerned, a look at longer time series underlines the positive development of the sector: since 1989, extraction and consumption have “almost quadrupled,“ the book says.

To refer here to the current container problems would be too short-sighted. Because: according to Montani, there has been a decline in the last 3 years, by (-)12% (with 2020 contributing the most). In the period since 1989, on the other hand, there had been a fivefold increase.

If we now add the stable production in the quarries to these declines in global trade, a conjecture is obvious: it could herald the end of the global traveling circus that has characterized the stone industry for several decades.

Montani does not say this – we want to speculate a little about it:

What we mean by traveling circus is not that exotic varieties, available only in one country, are transported to another and sold there.

We mean the fact that blocks are driven around the globe for processing and then come back processed to the consumer or even to the country of origin.

The Italian processors mainly around Carrara invented this business model and around the year 2000 the Chinese adopted the concept for their industrial centers in the south of the country. It is based on three factors: low transportation costs, a strong equipment of the companies with machinery, processing centers close to the sea. In the case of China, the low labor wage was added.

Or is the current negative trend perhaps an anticipated adaptation of the stone industry to the fight against climate change?

Certainly not, as can be seen from Montani’s figures: as the most important reason for the decline in trade over the last 3 years, he cites China’s greater focus on the domestic market.

So, no serious changes after all? And now that China’s stone companies are breaking new ground, will other suppliers simply take over their role, such as companies from Vietnam, Egypt, Iran, or Turkey?

One must be cautious in making predictions, but may include a whole new factor in the considerations: through Covid-19, there has been an increased demand by private individuals everywhere for stone from domestic production – this simply for the reason that, due to the lack of containers, foreign materials had become scarce and expensive with dealers.

Now add to this the fight against climate change, for example the EU’s “Green Deal“, which promotes domestic materials in order to save CO2 emissions from transport – Covid-19 has perhaps done the groundwork, so to speak, so that in the future consumers will suddenly know and appreciate domestic varieties.

One thing is certain: this will not completely dry up the traveling circus, but only reduce the absurd triad of shipping-processing-return transport for “commodities“.

Not affected will be the exotics (quartzites, onyxes, colored marbles and granites, limestones with fossils) – and one can even assume that the demand for them will rather increase.

A few more details from the treasure trove of observations Montani has compiled:
* it is not just the Big Five in production (China, India, Turkey, Brazil, Iran) that shape the stone sector. Regionally, there are hidden champions: Montani names Palestine, for whose gross national product the extraction of local limestone and its export to Israel, Jordan and the United Arab Emirates plays an important role;
* U.S. imports of natural stone have fallen steadily from an all-time high of $3.409 billion in 2015 to $2.748 billion in 2020;
* for per capita consumption, the new ranking is Switzerland, Saudi Arabia, South Korea, Belgium, Portugal;
* for natural stone consumption worldwide, Montani expects a strong increase from currently 91,350 million t to 108,920 million t by 2025.

An open flank of the natural stone industry

Talking about the utilization of the quantities of material extracted from the quarries, in other words: the above mentioned waste problem of the sector.

The fact that of the 318 million tons extracted from quarries, only 155 million tons go into further processing as raw blocks is not the fault of the companies. It is mainly due to the fact that the rock naturally has cracks and fissures that make it unsuitable for further use. Later, when the blocks are cut, a lot of stone powder is lost, so that in the end the figure is only 92 million tons.

However, it is becoming increasingly apparent that this peculiarity of the material is becoming a problem for the sector. Competitors, who have no real arguments against natural stone in terms of sustainability, are using the waste in the quarry to criticize it. We had already pointed out a corresponding report in Architectural Digest magazine that poked right into this open flank of the natural stone sector.

The solution is called design, that is, the use of the leftover pieces for small everyday objects. Some associations have already done preliminary work here with their competitions.

This new market would be doubly profitable for the industry: there is a huge demand for beautiful little things that consumers can use to enhance their everyday lives.

And such objects in households would provide 24/7 free advertising for natural stone.

Montani also analyzes the export of machinery and tools, which we will cover in a separate report.

The book “XXXII Rapporto marmo e pietre nel mundo 2021 / XXXII Report marble and stones in the world 2021“ is bilingual (Italian and English), has just over 290 pages and is published by Aldus Casa di Edizioni, Carrara. It can be downloaded for 30 € as pdf from the publisher’s webpage.
Please note: the version for download on the webpage is still the 2020 issue of the book.