At the Rocalia fair in Lyon, France, dry stone walling experts and artists once again showed what can be done with stone without any mortar at all 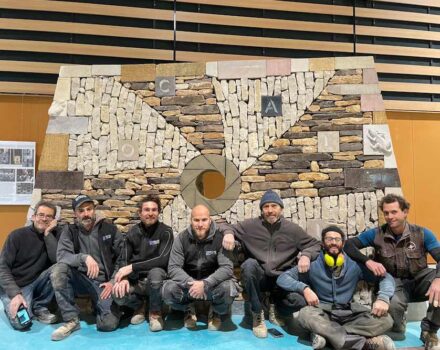 The artwork “De Rebus Naturae“ plays with geometry, references to Ancient Egypt and the ancient philosophers Epicurus and Lucretius

The Association of French Dry Stone Walling Specialists (Fédération Française des Professionels de la Pierre Sèche, FFPPS) shows up at the Rocalia Natural Stone Fair each time with a special work done live on site. In 2019, the Aztec god Quetzalcoatl had been sculpted in stone as a snake and laid out on the floor of the Hall of Métiers et Compétences (Business and Skills). In 2021, the work was no less demanding, but more mysterious: it was a portal with a height of 2.47 m, a width of 4 m and a thickness of 0.5 m in the shape of an isosceles trapezoid – of course, visitors immediately felt reminded of the entrances to temples in ancient Egypt. 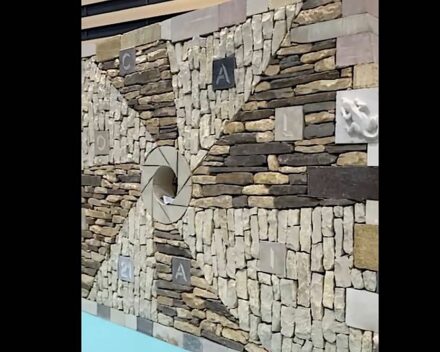 This was great, and once again demonstrated the creativity and skill of the French specialists in dry stone walling – with such cleverly layered chunks of stone you can do much more than just secure slopes in vineyards.

Last but not least, we do not want to conceal the fact that such walls are also ecologically valuable in contrast to concrete walls: they provide habitats for animals and plants and survive storms in that, for example, in the event of a landslide, the material does not break but remains in place for the restoration of the wall.

The initiators had pointed to the ecological strength of dry stone walls with a warning pointer on a poster: “…provided that the stone does not come from the other side of the planet!“ they named as basic condition for climate concerns.

With the title for their work, the artists and experts had reached high: “De Rebus Naturae“ (Of a Natural Thing) they had christened the project, with reference to the Roman philosopher Lucretius, who in turn had set a monument to the Greek Epicurus in the work “De Rerum Naturam.“ 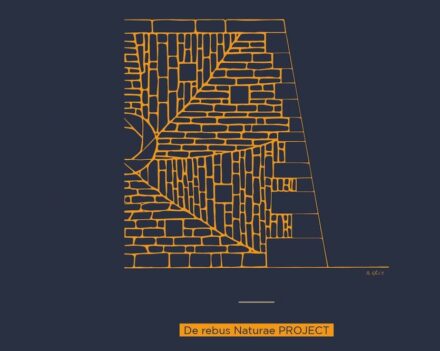 In addition to the Fédérarion, Laetitia Carlotti of the Colectiv Arterra was involved in the work. The group of artists from the island of Corsica is dedicated to the many forms of care for the landscape and nature, as well as land art.

“De Rebus Naturae“ was for sale at the end of the fair. It shows: Dismantling, transporting, and rebuilding is also easy with dry stone walls.

The next Rocalia will be held together with horticultural fair Paysalia from 05 to 07 December 2023 again at the exhibition center in Lyon.