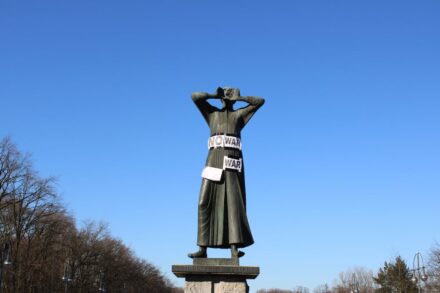 On February 24, 2022, Russia’s President Putin attacked Ukraine by military means and started a war against the neighboring country. On March 08, on our websites and social media, we had called on artists worldwide to send us a photo of a sculpture on the theme or any other artistic commentary on it.

Below are some of the images we received. More will follow tomorrow. 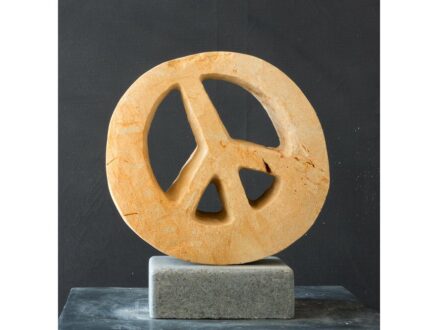 Sculptor Klaus W. Rieck from Germany sent us a sandstone peace sign and wrote in an email that he got right to work when he read our call for artists. But when the work was finished, a hollow space appeared in the stone, so that the sign had to be placed at an angle: “One thing led to another, as it often does, yet in the end it is coherent. Peace is, so to speak, in a crooked position and it needs a push from the outside to be straightened out again… All in all, peace is fragile.“
https://www.klaus-w-rieck.de/ 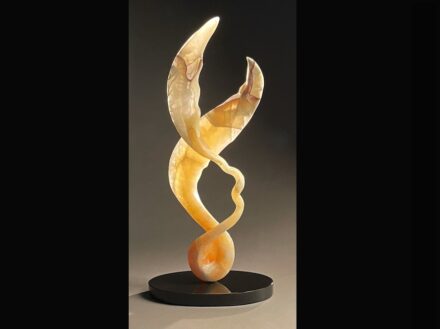 Sculptor Somers Randolph from the USA, a specialist in filigree and intricate forms, made the fragility of peaceful coexistence between nations his theme, too: “When peace finally arrives it will be fragile and delicate like a new leaf,“ he wrote as a reinterpretation of an older work made of translucent Utah Calcite.
https://somersrandolph.com/ 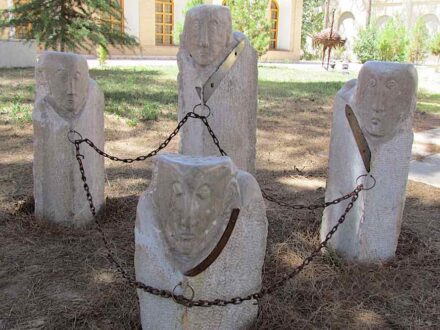 Mohammadmoslem Saeid from Iran devoted his work to the aftermath of military conflict. “War is always devastating, in the past as well as today: it brings nothing but captivity, displacement, depression, rape.“ The work is on view at the Sanati Contemporary Arts Museum in the city of Kerman, Iran, and has captivity and slavery as topic.
https://www.instagram.com/tabaa_saeed/ 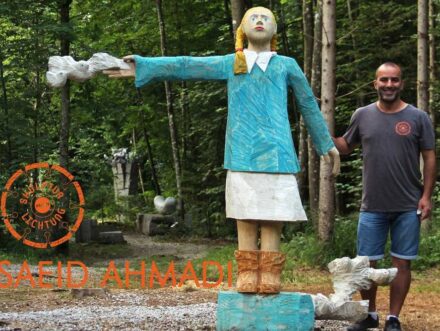 Saeid Ahmadi, Iran: Sculptor Tobel from Germany, initiator of the annual Kunstdünger Sculptors‘ Symposium not far from Munich, showed solidarity among international artists: fellow sculptor Saeid Ahmadi, a guest at the 2016 symposium, had to leave his home in Kharkiv in Ukraine because of the bombing of the city. Tobel and his wife vacated their house close to the symposium venue and let their colleague and his family move in. Local initiatives raised money for the family. As a guest at the 2016 symposium, Ahmadi had created the figure of a girl with doves of peace from the trunk of an oak tree.
https://www.skulptur-lichtung.de/ 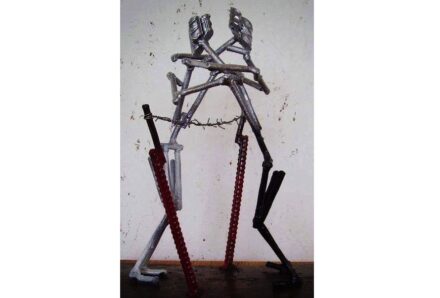 “Hug for Peace“ is what artist Jon-Pat Myers from Johannesburg, South Africa, calls his work made of iron bars. He writes about the two figures: “The legs are black and white to depict different roots or cultural background. The torsos are both silver to represent unity and rising toward the light. The posts of the barbed wire divide are red to show the blood spilled in conflict. The idea is that we are all people and need to rise above the divisions to see our common ground in peace whilst still having our cultural roots.“
https://www.instagram.com/Myersdesignart/ 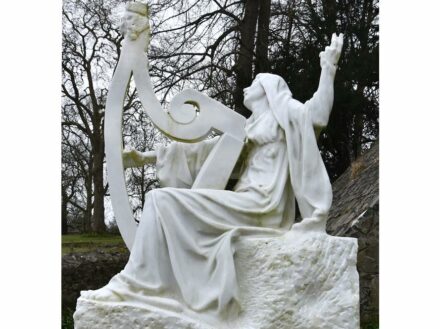 War brings special suffering to parents who lose their children as victims of the fighting or as soldiers. We show a photo of a monument from Ireland by AJ Victor Segoffin, where “Mother Ireland“ (title of the work) mourns her sons killed in combat. Taken from the book “By the Way“ by Ann Lane about sculptures along country roads (with kind permission of the author).
https://www.stone-ideas.com/85802/sculptures-in-ireland-ann-lane-by-the-way/