In the virtual showrooms of the second generation, the possibilities of augmented reality will also play a role in the sale of natural stone in the future 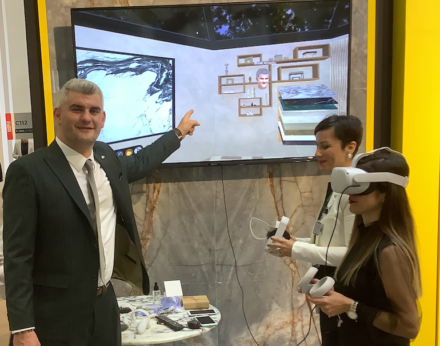 Unstoppably new technologies are also moving into selling natural stone:
* it started about 15 years ago, when the first digital bathroom planners came on the market;
* the next step was helmet glasses (Head Mounted Displays): here the customer does not remain quasi outside in front of a screen but is drawn into an Augmented Reality (AR) – at Marmomac in 2017, Spanish Levantina and Greek Stone Group International showed how exciting a visit to a quarry can be with these devices. At the same time, Italian manufacturer Intermac presented eyeglasses with a special frame where instructions for repairing a machine could be superimposed from afar;
* last, the pandemic has enormously advanced the virtual showrooms.

Currently, the second generation of digital showrooms is now entering the market. The aforementioned technologies are being linked together. At the Marble Izmir 2022 trade fair, the Turkish company Alimoğlu showed its prototype.

Some may dismiss this as yet another flash in the pan. But Burak Alimoğlu, junior manager at the company and the driving force behind the idea, was prepared for such reservations when we visited his booth: on his cell phone, he showed us a video of his two-year-old son sitting on the floor at home, donning helmet goggles, and splashing around in a virtual pool of water with the greatest of pleasure.

“In two years, everyone will want this,“ Alimoğlu outlined the prospect, “We’re developing the selling patterns of the future here.“

Metaverse, is how he named the project. The name recalls the latest venture of Mark Zuckerberg’s company Meta, the group that owns Facebook, Instagram, and a few more. We have linked a video below, in which Zuckerberg spends a good hour explaining the concept.

Two aspects are central to the new generation of showrooms:
* the visitor is virtually live in the showroom and can actively do something there;
* he can be guided through the exhibition by a virtual company representative – as, in reality, a direct customer conversation is possible.

Admittedly, the avatars are still very angular and awkward. But work is already underway on photo-realistic images of the people involved: It will one day be possible to show the gestures and the facial expressions of the other person. Zuckerberg discusses this in his video from minute 1:01:26.

The pandemic has taught us how important the many levels of body language are.

Another aspect that plays a major role especially at trade shows: for a real sales talk, the salesperson dresses up, puts on a costume and makeup, or puts on a tie and collar. For this level of communication, there is a really wide field in the virtual showroom: In Zuckerberg’s video, the topic is discussed using the example of a dressed-up female influencer from minute 39:50.

However, helmet goggles are needed for this entry into augmented reality (at least for the time being). How does it get to the customer?

Alimoğlu wants to ship them to local retailers or to regular customers.

Each customer will have his or her own showroom: if you want to buy blocks, you can see them (and rotate them virtually in space); if you are interested in end products, you can see them demonstrated. In a later report, we will show the virtual showroom of the German company Draenert, which takes a slightly different approach.

Last but not least, another technical option for the virtual world: holograms.

Does Burak Alimoğlu have more news up his sleeve, perhaps some for beyond the next years?

Of course, because he is a technology freak and has immediately founded the company RGBKOD for the development his Metaverse, which will develop the whole thing and sell it later on.

As for natural stone, he stresses that touching the material is absolutely part of selling it. You can experience the phenomenon at any trade fair, where professionals and laymen visually admire the particularly beautiful stone slabs and always touch them, almost caress them, and thus try to grasp them haptically.

Alimoğlu refers to data gloves, more generally: to wearables. He thinks that in the third generation of virtual showrooms, virtual touching will also be part of the sales experience.