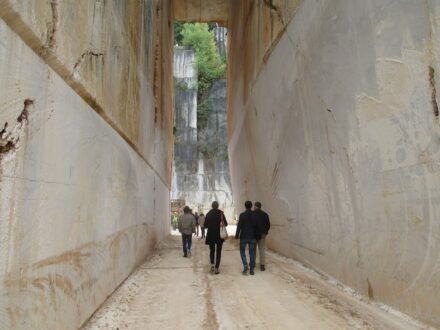 Following the decision of the Brussels Parliament and Council, misleading stone names will be prohibited on the Community markets in the future

Very good news also for Europe’s natural stone sector: the EU Commission has decided that so-called Geographical Indications (GI) can also be used for products from the craft or industry sector. This also includes natural stone, for example slabs of Carrara marble, tiles of Belgian Petit Granit or everyday objects made of Portuguese Estremoz Marble.

In practice, this means that misleading product names will be prohibited in the future: for example, an alleged Carrara marble, which in reality comes from China or Turkey, may no longer be placed on the markets of the European Union under this name. Mind you: under this name. Under other names, of course, it may continue to be marketed in the EU.

The Commission’s decision was published on April 13, 2022. Now it still has to be ratified by the Community Parliament and the Council of the heads of state or government. It can enter into force on January 01, 2024.

A short explanation, of the issues at stake: Geographical Indications existed so far only for agrarian products. We had explained details about this in the article linked below.

Now, however, products from artisanal or industrial production can also be upgraded with a Geographical Indication. For natural stone, France, among others, has shown in recent years how it can be done: there, several types of stone have obtained such a status – but their title has so far been effective only within the borders of France, originally for protection against concrete that was brought to market there under the same natural stone name.

Now the protection of the name can apply also in the other 27 countries of the Community.

On the Commission’s web page on the subject, details can be found under “Questions and Answers“: The regulation applies “to craft and industrial products such as natural stones, jewellery, textiles, lace, cutlery, glass and porcelain.”

Craft products are those where most of the manufacturing was done by hand; industrial products come from mass production, so they can also be, for example, facade panels, floor tiles or paving stones.

In 2014, the Commission had started work on the new regulation. The process took so long not only because the ideas of the natural stone countries involved had to be reconciled. There were also different ideas about whether, for example, a new service should be set up at EU level, whether it would be better for the individual countries to award the title, or whether the best of the various options should be packed into a new solution.

Now the Commission has opted for the mixed approach:
* usually, an application is made in the home country of the (stone) producers or Trade Organization. There the petition is examined and if, accepted, passed on to the European Union Intellectual Property Office (EUIPO). It ultimately decides on the application.
* Under certain conditions, there is also the possibility for an applicant to submit a self-declaration and apply directly to the EUIPO.

In the documents, based among other things on the experience of France, the cost per designation of origin is estimated at €50,000.

Several objectives which the Commission wants to achieve with the Geographical Indication:
* to preserve the skills and traditions also in Europe’s hinterland by giving recognition to the corresponding products on the markets;
* producers are to be encouraged to draw on their niche know-how;
* in general, the Commission wants to strengthen people’s sense of identity with their regions;
* in turn, it hopes to strengthen tourism to these destinations;
* consumers should have more certainty in their purchasing decisions and therefore turn more to local products.

Another important result of the complex procedure was that the regional Geographical Indication will, in future, be compatible with similar regulations in countries outside the EU. This should make business difficult for product counterfeiters worldwide.