A war is not over when it is over 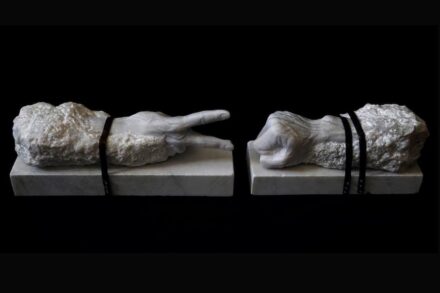 Through the life of the Iranian artist Bahman Chegeni, Kurd and believer in Yarsan (Zoroastrianism, Zarathustrism), runs the experience of violence and discrimination

Peace and, conversely, war and violence are the central themes in the works of Bahman (first name) Chegeni. The Iranian sculptor was born in 1982, in the second year of the war Iraq-Iran. This later so-called 1st Gulf War was to define his world until Chegeni was 6 years old: “I remember the warning alarm and running to shelter, also the nightmares and fears. I lost some of my childhood playmates in the bombing,“ he writes us in an email. We have left the quotes largely in his English. He had participated in our initiative “Peace for Ukraine“.

We learn: war is not over when it is over.

In general, the experience of violence runs through his life. Because his family is Kurdish and has Yarsan (Zoroastrianism, Zarathustrism) as religion.

He had to experience discrimination at an early age. Nevertheless, he was able to complete a degree in computer engineering with a focus on software at Hamedan University (Boali). In principle, non-Muslims also have access to universities there, but they have to pay for their studies themselves.

At the age of 24, he came into open conflict with the authorities when he joined what he calls the “Silent Protest“ for more freedom in the country. “The government responded to us with 45 days in prison and expressed violence and psychological torture against us.“

He then chose art as his way to advocate for peace and nonviolence. This time, he went to Tehran University and graduated in sculpture. He supported himself with his computer skills.

The fact that hands appear in many of his works, he understands as a means of expression for human freedom of choice and for humanity, but equally for the dark side of our actions: “We humans have done a lot with our hands since ancient times: we have built, we have destroyed, we have loved, we have hated, we have helped, and we have fought and…“

An example is the work “It is not what you see.“ Depicted are the general strikes of 2009 and 2019 in Iran – first the Victory-V was the sign of the movement, later the clenched fist. Chegeni placed iron handcuffs around the two marble sculptures (see lead image above). 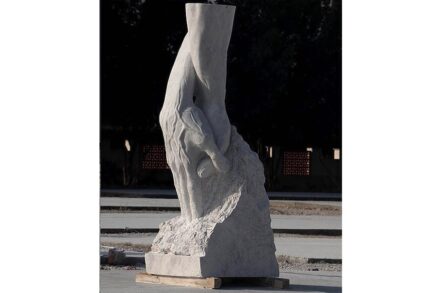 In “Touch,“ created in 2021 at the 6th Kish Sculpture Symposium in Iran, he addresses the strict interpretation of the Koran: touching between men and women in public is forbidden and punished. “I try to cheer young lovers to hold hands or kiss each other and the like,“ he writes. 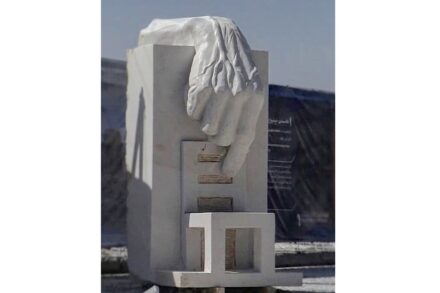 His last work at home was “Chair Handle“ for the Golgohar Symposium in Kerman, Iran 2021. The theme here is that the Islamic Republic has evolved towards a dictatorship with omnipotent at the head of the state. After the symposium, he was banned from appearing in public and presenting his work. 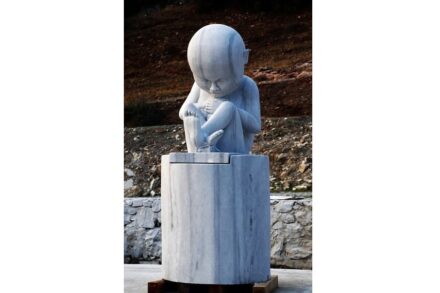 In “Creation“ (Turkey, 2021), he depicts the sense of threat: the fetus, which is supposed to be in the mother’s womb, is here placed in a city square amidst cars and pollution. 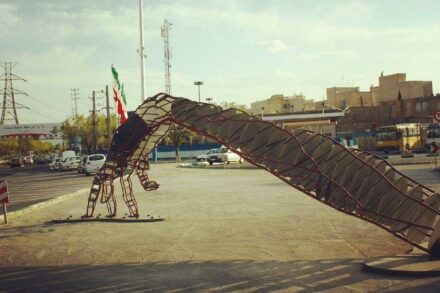 “Hand of Angel“ focuses on an event from the Iraq-Iran war of 1986: at that time, the Iraqi army drove 75 Kurds into a water hole with their hands tied. In 2017, divers discovered the remains of the dead. 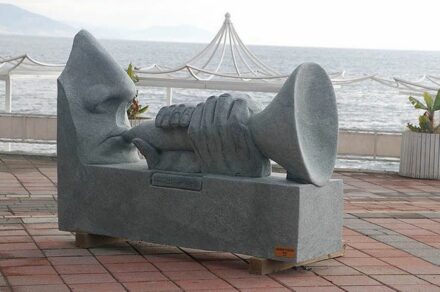 Finally, “Seraph“ from the sculpture symposium in Alanya 2019, this time not marble, but diabase. Who can guess what message is trumpeted to the world here?

In Chegeni’s family, art always played a big role, as he writes, simply because in his religion all ceremonies are accompanied by music. His father was an engineer in the oil industry. His brother is a musician, and his sister is an architect. 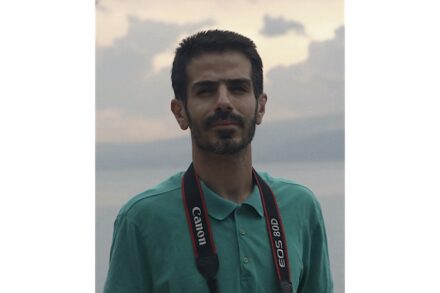