2021 was a “Golden Year“ for the Turkish natural stone sector 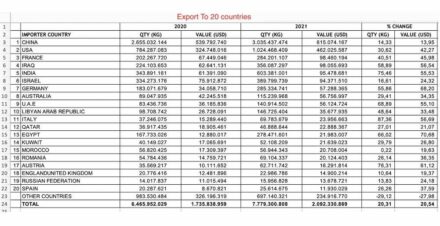 The country achieved an increase of +20.54% in exports by value compared to the previous year, and compared to 2019, the last normal year before the pandemic, as much as +13%

The heads of the Turkish Associations speak of a “Golden Year“ for the natural stone sector in Turkey regarding the Covid year 2021, and there is also a bit of self-praise involved, because the elections for the Association’s leaders took place in April. What is meant by the Golden Year is that the right course has been set and the numerous state funds have been well spent. This is undoubtedly true, because: in 2021, Turkey’s natural stone exports reached US$ 2.09 billion – this was an increase of +20.54% by value and +20.31% by tonnage compared to the previous year. This is according to the latest figures from the Istanbul Mineral Exporters’ Association (IMIB).

While some of this increase is due to catch-up effects from the Covid year of 2020 (US$1.735 billion, 6.46 million t), when traders cleared inventories before buying new goods. In that year, Turkey posted a moderate negative result of (-)6.8% by value.

But even compared to the last normal year before the pandemic, growth is respectable: compared to 2019, Turkey achieved +13% growth in 2021 – which isn’t so bad. The president of the Tümmer Association, Ibrahim Alimoğlu, cites these figures in a March 2022 interview with “Stone Times” magazine and immediately sets expectations for the near future: “We want to reach a figure of US$2.5 to 2.7 billion in 2022.“

Alimoğlu, a veteran of the industry with the company of the same name, also has expectations of politicians: for further growth, the issuing of quarry licenses must be facilitated and accelerated. The state should also create better conditions for the companies with more favourable energy prices. It should be noted that natural stone is a foreign exchange earner, also in Turkey.

But Alimoğlu also sees an obligation with the industry: there is a “negative perception“ towards quarries and mines and therefore he wants to “give more weight to studies related to public relations and activities for public authorities.“

The conditions for this are currently not bad. First, the 16 associations in the mineral sector have been cooperating for about a year now – for decades, they tended to go their separate ways.

Secondly, the figures also show the importance of natural stone within the minerals industry. Mevlüt Kaya, president of the EMIB association, mentions in the same issue of Stone Times magazine: the more than 2 billion US $ of stone are opposed by only 467 million of zinc ore, 451 million of copper ore and 422 million of iron ore.

Just a few remarks on the table for which we have used the analysis of “Marble Trend“ magazine (#57):
* the still unbroken record for natural stone exports had been set by Turkey in 2013 at US$2.225 billion;
* the current export increase is largely due to end products for the USA. The deliveries of blocks to China and India have less impact on the total;
* in addition to end products made of marble, those made of travertine were also well received on the markets;
* in the Arab world there was a significant drop in demand, mainly due to the diplomatic crisis between Ankara and Saudi Arabia over the murder of journalist Jamal Khashoggi: of the approximately $131 million shipped to the Arab world in 2020, only one-third, or $0.445 million, remained in 2021.

What is special about the statistics is that the share of higher value products is continuously increasing. Here, the commitment of the IMIB and EIB associations together with the Marble Izmir trade fair in favour of product design with natural stone seems to be having a positive impact – more and more entrepreneurs seem to be reinventing traditional mosaics using waterjet, for example.

There are also some companies that have been able to land contracts for large construction projects. Up to now, this has mostly been limited to Turkey, but increasingly there are projects which are in terms of technical standards also internationally respectable.