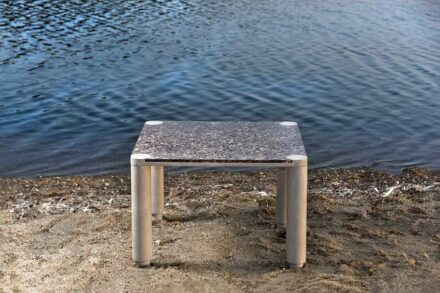 In the life expectancy of the plant of 80,000 years and the durability of the stone she brings together the really big periods of time

If what French marine researchers have found out is true, the seagrass Posidonia Oceanica reaches the highest age among life forms on Earth: 80,000 years could be the life expectancy of such a plant, according to findings from genetic analyses. No wonder that the Greek designer Alex Mint has chosen this miracle of nature, commonly known by the profane name of seaweed, for her current collection of side tables: because she likes to work with natural stone, and that, after all, achieves shelf lives of millions of years before it plunges back into the cycle of rocks.

Beyond these temporal dimensions, there is then only eternity, where, as is well known, the gods are at home.

And it is now clear that Alex Mint’s current collection of furniture features the gods, or more precisely: the dazzling figures from Greek mythology. “Oceanides“ is the name of the collection, the individual pieces bear the names “Oceanus“, “Tethys“ and “Calypso“.

They are available in round and square and in different sizes. 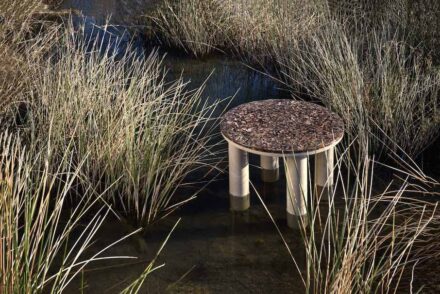 The legs of the tables are simple marble columns, tapered toward the bottom. Looking at a photo of “Thetys“ from the pdf about the collection, we involuntarily felt reminded of Botticelli’s Renaissance painting, where Venus is born from the sea.

The furniture pieces also have in common the material for the tabletop. For this, the sea grass was used. The tabletops were manufactured by the Greek start-up Phee. It develops uses for the remains of these plants, which are washed up on the beaches and are usually cleared away by the municipalities for expensive money. The company’s other objects include gift boxes, cell phone covers and rackets. 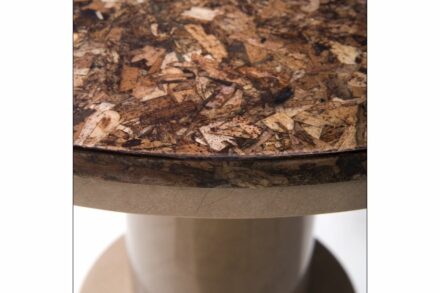 Upcycling is their concept: what is always just trash in the usual view is dried, refurbished and glued together with natural resin to make valuable panels. There’s a lot of manual labor involved, as well as local know-how on how to handle the material. 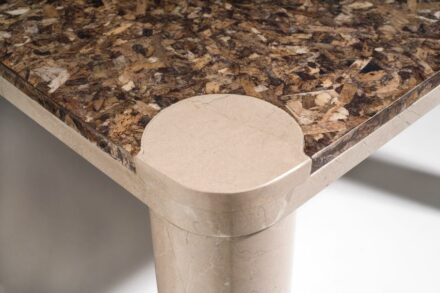 Enhancing both the handiwork and the craftsmanship is one of the concerns of the designer, who also has the stone worked in Greece. It is the local Tortora marble from the Peloponnese. That’s the part of the country beyond the Corinth Canal.