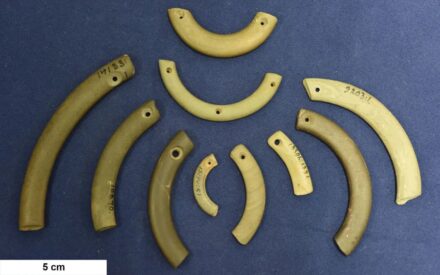 Skillfully manufactured slate rings from hunter-gatherers in northeast Europe 6000 years ago may have served for social relations between distant Stone-Age communities, a researcher from Helsinki University supposes. Maybe, the stone pieces were intentionally broken and worn by people at different locations.

Birch Hill Equity Partners and Investissement Québec has acquired Polycor Inc. in partnership with the company’s management from TorQuest Partners and its co-investors, Wynnchurch Capital, and PNC Mezzanine Capital.

Beauflor is a producer of vinyl flooring. Some of the patterns emulate natural stone.

Can carbon dioxide be removed from the atmosphere and stored safely and permanently in the ocean using alkaline rock minerals? Scientists from 7 nations led by Geomar Helmholtz Centre for Ocean Research Kiel try to find answers in an experiment in the Raunefjord near Bergen, Norway.

NASA scientists have started studying samples of the lunar surface brought to Earth by Apollo 17 astronauts in December 1972 and stored in a freezer. The research is part of the Apollo Next Generation Sample Analysis Program (ANGSA), preparing for the upcoming Artemis mission to the Moon’s South Pole.

While the Italian economy totters, the marble sector in Carrara reaches record-breaking sales, Italics magazine writes and asks: How did they manage to pull it off?

Saudi Arabia’s Ministry of Industry and Mineral Resources has prequalified 25 companies to develop a limestone complex in the Riyadh region. The winning bids from 39 entries are expected to be announced in June.

Bronze Age funeral pyres in Northern Italy may have been used over generations, with cremated remains left in situ as part of complex funerary rituals.

Archaeologists from the Cornwall Archaeology Unit have discovered the remains of a stone circle in the Castilly Henge, located in Cornwall, England.

Video of the Month: The Guardian newspaper visited the newly designated Gardens of Stone state conservation area to explore extensive surface cracking in the iconic rock pagodas that dot the landscape. The fractures appear to be the result of subsidence from a nearby underground coal mine.