The city of Angoulème has now erected a menhir for Albert Uderzo on the forecourt of its train station, in addition to the obelisk for René Goscinny 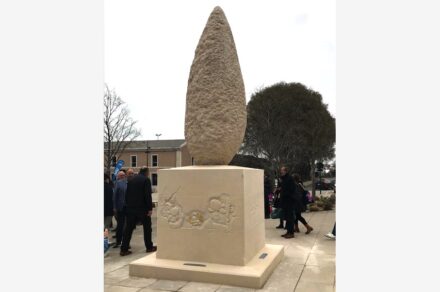 Of course, it was fitting, and of course, it could only be in Angoulème: the city in France that calls itself the meeting place of the worldwide comic scene now also has a memorial stone for Albert Uderzo on the square in front of the train station, in the vicinity of that obelisk for René Goscinny.

Uderzo, the cartoonist, had died in March 2020 at the age of 92, and obviously, his memorial had to be about a thick lump of stone. After all, one of his characters was a dealer in menhirs – we remember: it was the fat one of the two, and immediately his rage-filled question comes to mind: “I AM NOT FAT!!!”

Angoulème is located in the Charante, north of Bordeaux, and at the monument to the draftsman, a stone from the area came to fame thanks to Vilhonneur Limestone from the quarry of the company Rocamat in Moulins-Sur-Tardoire. The raw block weighed about 14.7 tons, which the two sculptors Morgane Cabusa and François Desforges reduced to 4.5 tons in 5 weeks of work.

Including the base, the menhir on the station forecourt is now almost 5 meters high and measures around 8 tons.

Of course, in such a context, the work cannot succeed without magic: “We didn’t have a magic potion, only tools,“ the sculptor and the sculptor emphasized to the newspaper Le Parisien.

At the inauguration, Anne Goscinny, the daughter of the author of the comics, gave a slightly modified version of another pithy exclamation: “They’re crazy, the people from Charente,“ she told those present from the same place. On the obelisk in memory of her father, numerous such sayings are engraved in the Pierre de Bourgogne limestone. This stone had already been placed in 2017 in front of the station of Angoulème 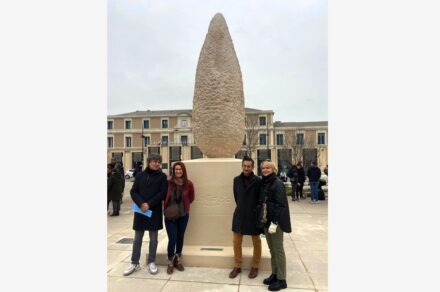 This time, the daughter of the illustrator Albert Uderzo was also present. Her family had donated the new monument to the city.

In January 2022, the menhir had been inaugurated, just in time for the International Comics Festival (FIBD) in the city. Angoulème is planning other memorials to celebrities from the scene, some as murals, so quite different from the fathers of Asterix and Obelix, who were the subject here.