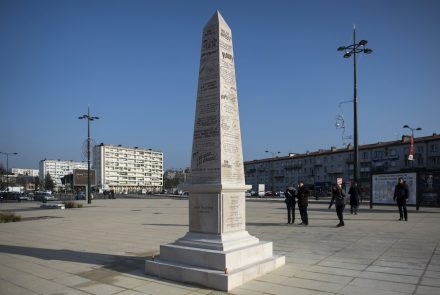 „PAR JUPITER“!!“ (BY JUPITER!!): A monument has been erected in the French city of Angoulème commemorating the famous cartoon artist René Goscinny, intellectual father of Asterix and Obelix, and Lucky Luke. The monument is 4.5 m high and weighs 7 t – „QUI EST GROS ICI??“ (WHO ARE YOU CALLING FAT??) – and is covered in quotations from the famous comic books. The limestone was provided by Rocamat of France (French, video).

„Trump prefers Turkish Marble“ writes the trade magazine Marble Trend (Nr. 39) with a swipe at the builders and contractors of the new Istanbul Airport, in which despite the intervention of the stone branch brought forth before President Recep Tayyip Erdoğan, Brazilian granite was implemented. US-President Trump used marble from the Island Marmara in a number of his real estate projects, according to the magazine. Efendioglu Mermer, e.g. landed a 45,000-t contract worth 945,000 US-$ for President Trump’s daughter Ivanka.

A new marble protection was developed by researchers from Princeton University. It uses a film of Hydroxyapatite (also: Hydroxylapatite). This calcium compound can also be found in human bones and teeth. Tests are planed with marble statues in Versailles.

March 05, 2017 is the closing date for registration of participants at the European Stone Festival. The meeting of stonemasons will take place in Hungarian city of Kiskunfélegyháza (May 19-21, 2017). Theme of the works realized during the festival will be „Secession and Life in the Puszta“ being open to wide interpretation.

Iran’s construction market in 2016 achieved a volume of more than 154 billion dollars, with a full-scale boom in residential building: out of more than 15 million Iranian families, 70% aim to be home owners for a total of 13.5 million residential units, while demand in the future is around 750 thousand new homes/year. Iran was in the focus of Samoter, the triennial exhibition dedicated to earth moving, site and building machinery in Verona (February 22-25, 2017).

„MIA+BSI: The Natural Stone Institute“ is using Blogger-texts for its promotional campaign in the US.

Jon Lancto (Big Fish Consulting) and Daniel Wood (Lurvey Landscape Supply) have been named 2017 MIA and BSI Presidents. Together they will govern the 2017 MIA+BSI Board of Directors and oversee the second year of the joint venture of MIA and BSI.

Artist Abraham Poincheval, specialist for extreme performances, will spent 8 days within a stone block of 12 t in the Palais du Tokyo in Paris.

New Webpage: Horning stone has updated its product ideas with stone in a jigsaw puzzle (1, 2).

Wedding pictures in the midst of a marble quarry dump are shown on a website. The material is meant to symbolize longevity.

Russian designer Jaroslav Misonzhnikov has designed a candelabra in marble enabling one to lower or raise a candle.

Video of the month: should the Bamiyan Buddha-Statues carved out of red sandstone be reconstructed? Taliban militia had blown up the 1500-year-old statues, the biggest originally 53 m high in 2001 in an act of barbarism (video, 1). (pebe)