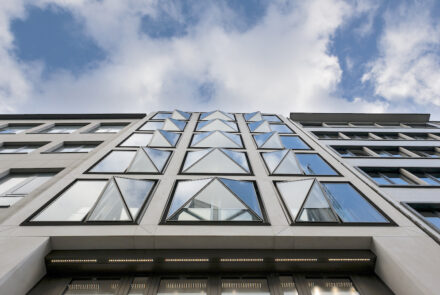 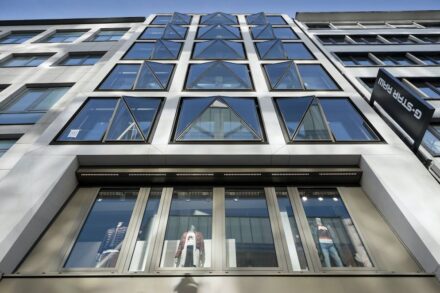 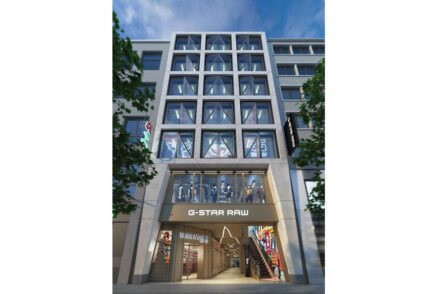 The Else-Kröner-Fresenius Foundation, as the client, wanted the design by the architects of Tek To Nik to recall the history of the Fresenius Medical Group

The site is cut as one would imagine a site in a medieval town: only 10 m wide at the front, then 45 m deep and 19 m wide at the other end in the parallel street. Its history in Frankfurt am Main (the city with the most important airport in Germany) is eventful: The Hirsch Pharmacy was founded there in 1462, and it has since become the global medical group, Fresenius. Of course, Fresenius no longer resides in the city, but it feels a connection to its history.

So, the architects of the Tek To Nik office were commissioned to redesign the narrow plot of land at Zeil 111 and give it a new lease of life. Today, the Zeil is one of the most important shopping streets in Germany.

The pharmacy is still there, and so one of the client’s wishes was that it should remain in continuous operation during the construction work. The client was the Else-Kröner-Fresenius Foundation, whose very name is a reminder of the Group’s history.

This demanded some special solutions in terms of technology and the construction process, which we cannot deal with here. We want to focus on the architecture for the revitalization of the site. 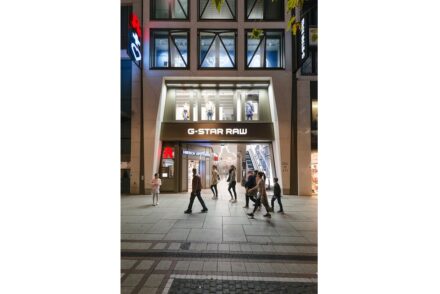 One of the architects’ goals was to attract passers-by from the Zeil to the arcade.

They, therefore, designed the façade with echoes of a gatehouse: on both sides of the entrance, there are massive-looking pillars made of the Portuguese limestone Creme Royal Vogue. The stone elements have extraordinary dimensions: the largest measure 3.20 x 1.20 x 0.80 and thus weighs six tons. Even so, the building gives the impression of stability and durability, as desired by the client. 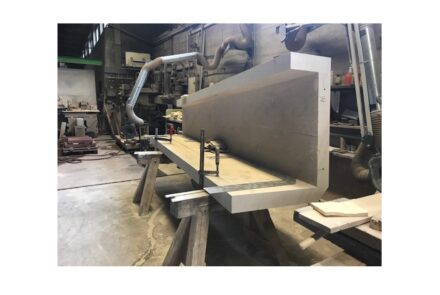 However, the pillars are actually only U-shaped hollow bodies. Each on is attached to a steel support. 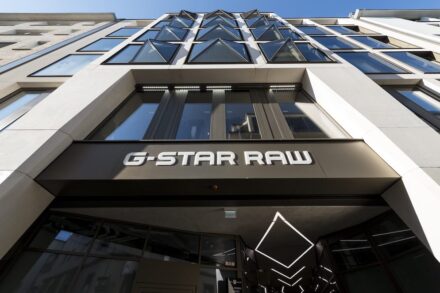 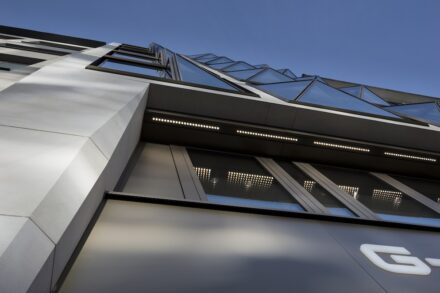 Such a portal exists on both sides of the plot as an access to the passage. Another special feature is the edges of the stone elements: directly at the access they are designed as chamfers, i.e., cut at an angle of 45 degrees. Manfred Wenzel, founder of Tek To Nik, first gives the practical reasons for this: “Normal corners would be easily repelled in the city and would then disfigure.“

But the chamfers also play a role in the effect of the portals, he adds: “The view of these slopes, a few centimeters into the stone, as it were, further enhances the impression of solidity.“

The floors above the pharmacy now house medical offices, offices, and apartments. In the façade, the natural stone continues from below – but it is no longer the defining material.

It is now glass, and it is executed in striking prismatic windows that protrude into the street line. One can see in this a reference to the many oriels of medieval buildings. Manfred Wenzel describes the concept of portals and prismatic windows as follows: “On the one hand, we have the massive stones and on the other the multiple glass reflections – we play with the notion of the opening.” 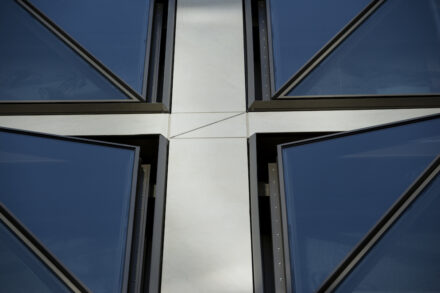 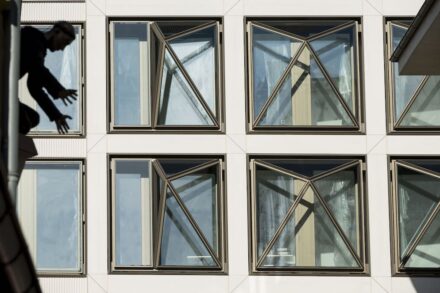 The architects again pick up on the glass triangles in the prismatic windows in the natural stone, like diagonal lines in the small squares. This helps to ensure that the façade is experienced as a unity, despite the very different details.

On the other side of the property, on the street Holzgraben, one also finds a portal and prismatic windows.

However, since the available façade width here is nineteen meters, almost double the width of the Zeil side, the front is framed with fluting.

On the upper floors are one- and two-room apartments with 25 to 45 square meters of space.

At first glance, the architecture and choice of materials, as well as the budget (€18 million), may appear to be signs of opulence: The reason for the design seems to be that a charitable foundation was the client here, wanting to create a monument to its own corporate history.

However, the architects point out a quite commercial aspect of their work: “The aim is not a short-term return by selling the building in the near future, but a long-term, permanent return on capital for the benefit of the foundation’s social purposes. This also requires a design and construction quality that is geared toward permanence and substance.“