Stone detail: an Adjacent Grain Analysis (AGA) and numerous other tests were used to find a suitable white marble for the façade of Capital One Hall in Tyson, Virginia 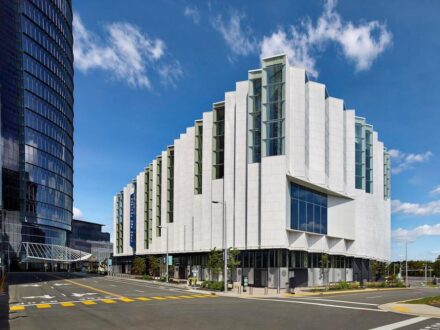 In our main article on the new Capital One Hall in Tyson, Virginia https://www.stone-ideas.com/94102/marble-facade-capital-one-hall-tysons-va/, we only briefly touched on the subject of the marble fa façade cade. Now, in this article from the “Stone Detail” series, we outline how HGA architects and consultants managed to virtually eliminate the risk of marble deforming on facades. Alex Terzich, the technical designer and facade specialist at HGA architects, was the lead on the project.

“All marble on façade deforms because the stone reacts to moisture and changes in temperature,“ Terzich soberly outlines the initial conditions in the project. The goal, therefore, had to be to keep the deformations and the rapid strength loss within safe limits.

The client wanted the building to be clad with an outer skin of white marble, both because of the beauty of the material and to give the building a prominent appearance amid the surrounding glass façade. After all, Capital One Hall is all about art and culture.

Alex Terzich contacted the RISE (Research Institutes of Sweden). There, senior scientist and geologist Björn Schouenborg had been in charge of the many investigations into the problems with white marble e.g. at Finlandia Hall in Helsinki.

Together with Paola Blasi, a consultant based in London, specialist in Italian stone and Chair of the European Standardization Technical Committee for Natural Stone, were identified marble types that met the client‘s ideas about the color and veining of the stone.

Then it was on to testing these stones.

As a screening method to narrow the number of suitable candidates, the first step was an Adjacent Grain Analysis (AGA), which RISE had developed as part of the Finlandia investigations by the European research project TEAM (Testing and Assessment of Marble and Limestone). In simple terms, this involves counting how many grains are arranged next to each other in a grain structure. Guidelines are: at eight or below, the stone tends to deform, at 9 and above, one is on the safe side.

Such AGA investigations can be done in a few weeks.

The 2nd step after this petrographic and rather theoretical analysis was real deformation tests, where samples from the quarry were subjected to real conditions on a façade in the laboratory.

Terzich and Schouenborg emphasize how well both methods confirmed each other in the results. In addition, there were analyses of the strength of the stone with ultrasound.

In the end, the decision was made in favor of the Cattani marble. This white stone had already been used for the Nykoping City Hall in Sweden.

Only stone from a single quarry in Colonnata was used.

This was followed by a rigorous production control, with full traceability of every single block, all the way to the first panel, i.e., the blocks or slabs were analyzed with AGA as they came from the quarry or the factory. This effort was reduced during the project in consultation with the client. Björn Schouenborg mentions “every tenth block“ as a reasonable test frame for most projects, provided that the initial control of all the first 10 blocks yielded satisfactory results.

However, in reality, things were not as simple as previously described – after all, with marble you are dealing with a material from nature.

As a result, some of the blocks did not achieve a 9GA value but were distributed in the range of 8. What to do?

The architect, consultant, and client found a Solomonic solution: for the façade, they chose those batches whose AGA was close to 9; the others were used for the flooring inside the building. Here, they benefited from the fact that extremely large securities had been planned in with the nine limit.

Capital One Hall began operations in October 2021. We write our report in May 2022 – according to Alex Terzich, there were no problems with deformations after the 1st winter.

Terzich will give a presentation at the Façade Tectonics World Conference in Los Angeles in October 2022 on many more details from the extraordinary project. Schouenborg will discuss the quality control of several projects in an ASTM International seminar in New Orleans also in October 2022.

As for finding a suitable test laboratory for the investigations described, Björn Schouenborg recommends one for Europe that is accredited according to the EN16306 standard. There are registers for this in the individual countries.