The marble and glass façade of the Capital One Hall in Tysons, Virginia minimizes heat gain and optimizes the light penetration 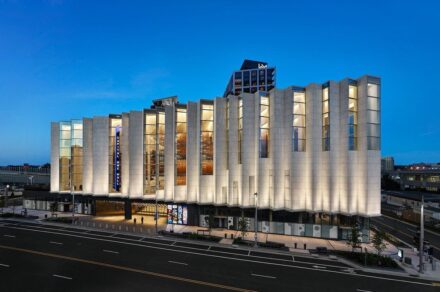 The architects came from HGA (Hammel, Green and Abrahamson)

There are two special features to report on the façade of Capital One Hall in Tysons, Virginia: its exterior skin of natural stone and glass is folded like the bellows of an accordion, and the stone used is white marble. There had been major problems with marble on façades in some well-known buildings like Finlandia Hall in Helsinki and Grande Arch de le Défense in Paris.

The client in Tysons was Capital One Financial Corporation, one of the largest banks in the United States. It has set up a campus and its corporate headquarters in Fairfax County in Virginia, easily accessible from Washington DC by subway. The centerpiece of this campus is the new Capital One Hall, which is the cultural center for the approximately 11,000 company employees and for the public.

The architects came from Hammel, Green and Abrahamson (HGA). 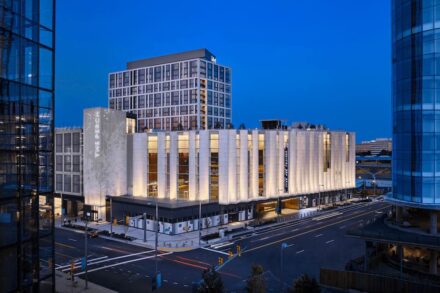 One of the challenges was to give the building a striking appearance. This is because there are glass skyscrapers all around, towering far above Capital One Hall.

The client wanted white marble, and in a long process, the architects found a variety from Italy that was not expected to cause problems with deformation.

A special feature of the selection process was that there was no fundamental commitment to the desired material, marble: the stone consultants had selected as possible alternatives white limestone from Italy and from the US state of Alabama, respectively, as well as a white granite from Brazil, of which there was a good experience in climates similar to Washington DC.

Alex Terzich, the technical designer and façade specialist at HGA Architects, explains the reasons for keeping one of the alternatives on the back burner until the very end: “We wanted to avoid a point at which people would be forced to stick with marble simply because they had previously decided against the alternatives.“ 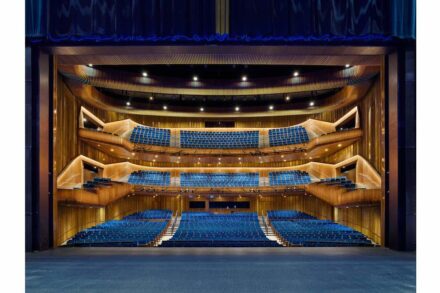 We describe the process of selection with multiple tests in a separate article as part of our “Stone Detail“ series https://www.stone-ideas.com/94131/marble-facade-adjacent-grain-analysis-aga/.

Of course, the building needed to achieve the highest LEED certification possible. Again, one step toward that goal was the design of the façade: it minimizes heat gain into the windows while maintaining maximum light penetration into the building’s interior.

This is an irregularly folded outer skin of marble panels and vertical glass panes.

To achieve this, the architects simulated the building during daylight and optimized the respective folds.

For the great weight of the stone slabs, Thornton Tomasetti, together with Arup as consultant, developed a special steel ladder-truss system.

The façade is very unusual when you stand closer to it – but it looks exciting, and the viewer feels invited to enter the building. 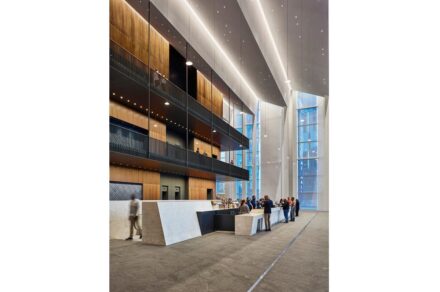 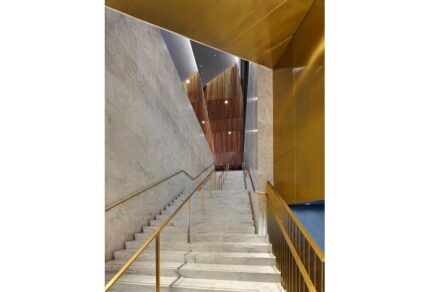 Everything there is tailored to art and culture:
* the open atrium has a capacity of 500 seated or 1000 standing. The space over 4 floors invites debating or free-thinking. Its ceiling picks up the folds of the facade;
* the main theatre seats 1600 with an orchestra pit and a fly system;
* a smaller black box theatre seats 225 for smaller performances;
* on the roof there is “The Perch“ at 100 feet with green space and, among other things, a beer garden and restaurant;
* at ground level, there is space for stores.

While the materials of the facade (marble and glass) appear cold, warm tones characterize the interior. The walls in the large theatre, among others, are clad in walnut wood. Brass elements provide acoustics.

The marble of the facade is found in the entrance area and on a staircase. The main staircase has terrazzo treads.