Stone Detail: Experiences from Finlandia Hall in Helsinki: a brief look into how the new testing methods were developed to prevent similar construction disasters with natural stone in the future 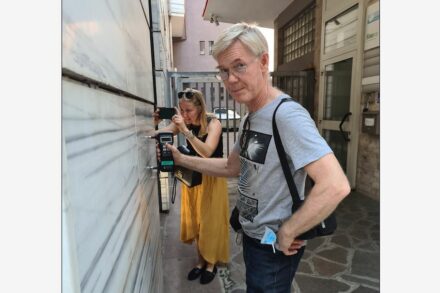 At Finlandia Hall in Helsinki, the second renovation of the marble façades has begun in March 2022. We had described (English: https://www.stone-ideas.com/92578/renovation-marble-facades-finlandia-hall/, deutsch: https://www.stone-ideas.com/92570/sanierung-marmorfassaden-finlandia-hall/) the problems with the bulging and expanding of stone panels that had given the iconic building’s outer skin the look of a mattress. In this “Stone Detail”, Björn Schouenborg from the Swedish Research Institutes (RISE) gives details of the innovative testing methods developed to prevent similar construction disasters with natural stone in the future.

For the quest to find a concept to distinguish a marble suitable for exterior use from one which is better fit for indoor uses, it was important to develop a scientifically sound test method at the same time as it had to be understandable for the users. Understandable and realistic, I should say.

In the TEAM project we monitored the diurnal temperature variations on several buildings. These variations, together with the knowledge that the highest documented temperature on a very dark (almost black) limestone façade in Europe, as well as in USA, reached 75 ⁰C. We added a slight safety margin and raised the temperature of the test to 80 ⁰C. Not of the marble specimens but on a, so called, black reference plate placed on top of the marble specimens. The black reference is of course calibrated properly with traceability to international standards. It is worth noting that when the black reference is 80 ⁰C, a white marble is seldom more than 50 – 55 ⁰C. Thus, the relevant temperature of the test could be defined. Trough the diurnal measurements of several buildings we could also define a relevant speed of the temperature increase and decrease.

During our research we also noted that the combination of moisture and elevated temperatures is much more destructive for marble than merely elevated temperatures. In fact, the thermal coefficient is significantly affected by moisture for some stone types. This has an important bearing on the dimensioning of dilatation joints for a façade.

There is always moisture in a façade panel, either from the back side ventilation, the building itself or from the outside. However, it is never saturated with water – another finding in another EU research project. So, adding moisture in a controlled and realistic way was crucial. It had to be a similar moisture gradient that we see in an actual façade panel.

Good attempts had been made to spray a mock-up with water to simulate rain. However, the influence of surface finish etc is too big to be able to evaluate the material itself. The solution was to keep one side of the marble specimens in contact with water by having it rest on a wet sponge.

To design a test equipment in the laboratory for this kind of test was not too difficult we thought. However, the test turned out to be quite sensitive to variations, changes etc so many details had to be controlled and subsequently defined in the standardized test method. We will not go into all details here.

At this stage we had a test equipment and a procedure. What we needed next was some sort of requirement, a limit value of the acceptable bowing and also on acceptable strength loss.
We tested a lot of different marble types in the TEAM project and were able to define relevant criteria. We also tested the influence of a lot of variables, such as the thickness of the test specimen. 20, 30 and 50 mm thickness were tested and the result was clearly different. We therefore had to decide on one thickness and choose the most common in Europe, i.e. 30 mm.

It is crucial to understand that the recommended limit of maximum bowing and strength loss are only connected to testing 30 mm thick specimens! The test is a material test and not a product test, even though some of the results can be used further on in an actual building project. We have received many requests to test 40 and 50 mm thick marble. This must be avoided other than in pure research. The limit values are only valid for test specimens of the defined size = 30 mm!

The European standard test method also includes recommendations to use ultra sonic pulse velocity (UPV) to monitor the changes during the accelerated bow test. Also for the purpose of establishing a correlation with the flexural strength. UPV is a non destructive test and can be used in production and on site. Without breaking the material UPV provides a good indirect estimate of the flexural strength and can be used to monitor the strength loss over the life time of the panels on the facade. 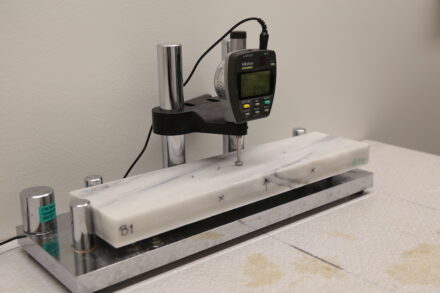 The renovation of the Finlandia Hall is a very special project. It has created a community of devoted people, from all stakeholders, working hard to find trustable but still practical quality assurance methods all the way from the block to the final panel mounted on the facade. The UPV is now used by employees at Lasa Marmo on the blocks, raw slabs and final cut to size panels. The influence from moisture and e.g. cold temperatures (often open working conditions in winter time) is known and have now been dealt with by Lasa Marmo themselves.

An Italian accredited test laboratory, nearby Lasa Marmo, is performing the factory production control of some standard tests while RISE is still engaged in assuring the microstructure of the marble is more or less constant and in line with the defined quality criteria. A final recommendation to all clients is to choose an accredited test laboratory for the task of quality assuring suitable marble for exterior cladding!

Hopefully the Finlandia Hall project opens the way to many more buildings being clad with marble again. We will share all findings in scientific papers in the future for the benefit of the entire marble community

Finally some remarks on the traditional way of material testing: Despite more than 100 years of research (intermittent) into this challenge no single test suitable for all marble types have been developed. Why? 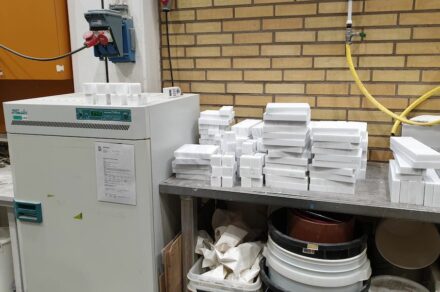 Marble is a carbonaceous material and as with other such materials there is a risk that it changes some characteristics under the influence of elevated temperatures. In fact, concrete is dried in about 38⁰C before some laboratory tests, not to change its properties. We have found that many tests on freeze-thaw durability uses a quite high drying temperature for the sample conditioning before the actual test and even, for the evaluation after the actual test, even European standardized tests. Strangely enough a standard freeze-thaw test on marble is therefore an unrealistic test of the frost durability mixed up with durability to high temperatures. Of course, we want to avoid this.

During our research in older studies, we found other examples where accelerated tests using as high temperatures as 300 ⁰C had been used. Not very realistic temperature on a rather white façade. We encourage further research but it has to be realistic in order not to create reactions that are totally unrealistic in the final application