Miscellaneous: news all around rock and natural stone 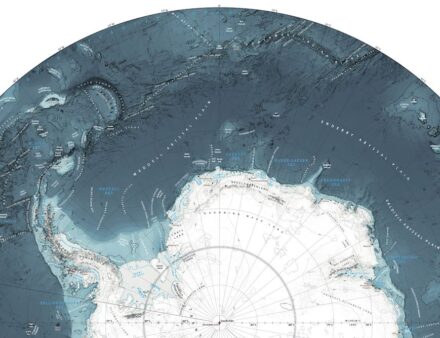 The Southern Ocean, around the Antarctica continent, plays a key role in the Earth system. The updated version of the International Bathymetric Chart IBCSO v2 shows the seafloor there with unprecedented accuracy. Its structure helps determine how water masses and currents move in the oceans and affect our climate (1, 2).

“Biesse Group strengthens its presence in Brazil”, the company informs. New headquarters located in Curitiba will be closer to customers.

The Brazilian stone exporters‘ Association Centrorochas will participate in Casa Brasil London 2022 (August 25 to September 08) to present the country‘s variety of natural stones. This year, it had already participated in the event‘s New York edition and the Bond Events Five Star Bahamas. Next will be Marmomac with a live edition of the Stone Summit and the Big 5 Dubai.

Wax-coated sand keeps soil wet, thus increases crop yields and thus can be an alternative to plastic sheets covering the ground. Researchers from the American Chemical Society (ACS) chose purified paraffin wax, a biodegradable substance available in large quantities. It can give a 20-nm-thnn coating on the grains. When the team applied the coated sand in a thin layer on an open field in Saudi Arabia, it decreased the loss of soil moisture of 50-80%.

The “living coffin” made from mushroom mycelium to accelerate dead human bodies to become one with nature again and to enrich the soil, was bestowed one of the „Green Product Awards“ 2022 (1, 2).

Buildings made of porous rock can weather over the years. Now, for the first time, scientists at TU Wien (Vienna) have studied how silicate nanoparticles can help save them.

As many as 10,000 Australians are predicted to develop lung cancer from being exposed to silica dust at work, new Curtin University modelling has found. A warning says that more than half a million Australian workers are currently exposed to the harmful dust.

Translating an ancient Greek inscription on a marble slab housed in a storeroom at the National Museum of Scotland since the 1880s, scientists found out that it was a list of cadets (co-ephebes) from a once famous military school.

Indian archaeologists have unearthed 65 enormous mysterious sandstone jars in Assam that may have been used for ancient burial practices. Similar vessels had been found before in Laos und Indonesia.

Video of the month: Norwegian archtitecture studio Snøhetta has installed 55 stepping stone at the sea shore in Northern Norway. The disappear and appear with the tides and illustrate the passing of time. The stones were cut and delivered by Evjen Granitt company (1, 2).