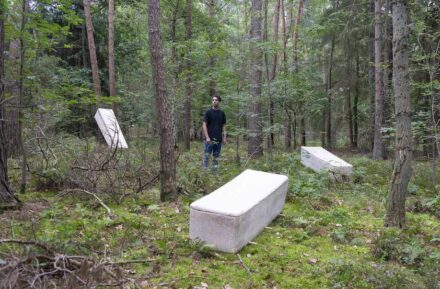 The TU Delft researcher Bob Hendrikx has designed a living coffin made from mycelium. The “Living Cocoon” helps the body to ‘compost’ faster, removes toxic substances, and produces richer conditions for new trees and plants. After extensive testing, including a collaboration with 2 major funeral companies, the first Living Coffin was already used for a funeral.

The company’s photos are misleading. Because, of course, the living coffin has to be burried in the earth – it needs groundwater to be activated.

Mycelium is a root network that e.g. grows underneath trees or meadows. Normally not visible, yet in outumn, it brings out the sometimes edible fungus above the surface. It plays an important role in nature as it decomposes all stuff and so provides nutrition to everything. More than this, it can neutralise toxic substances. 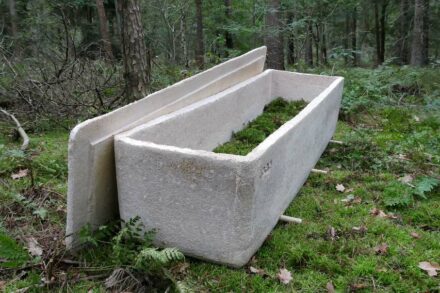 “The Living Cocoon enables human bodies to become one with nature again and to enrich the soil, instead of polluting it,” says Bob Hendrikx who founded Loop company. The speed at which a body composts generally depends on various conditions, but experience shows that it normally can take over a decade; the varnished and metal parts of a coffin, as well as synthetic clothing, can persist for even longer.

Loop expects that their cocoon will be able to complete this process in 2 to 3 years, because it actively contributes to the composting process.

In that process, not only are the waste products from the human body converted into nutrients, the quality of the surrounding soil is also improved, giving new life an opportunity to thrive.

The wooden handles to carry the living coffin can be removed before burial. It is GreenLeave certified. Ist insed is filled with a soft bed of moss, that not only feels good but also contributes to the composting process.

Practical tests conducted by US-company Ecovative have shown that the cocoon is actually absorbed by nature within 30 to 45 days, under normal Dutch conditions. 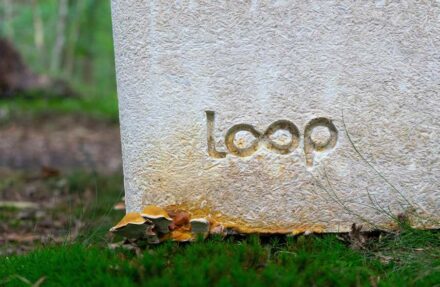 The people behind Loop come from the YES!Delft Incubator and they had extensive talks with funeral directors about the new product. Hendrikx: “These people well understand well how the burial process works in practice, and know all of the logistical requirements for burial. This is all valuable knowledge that they contributed to our development.”

Frank Franse, director of funeral cooperatives CUVO (The Hague) and De Laatste Eer (Delft) says: “As a regional funeral home, we think it is important to be involved in a sustainable innovation like this.”