A survey by the Swedish Natural Stone Association: young people want more traditional forms of burial, i.e., in a cemetery and with a headstone 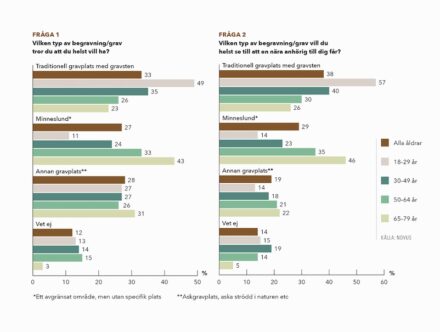 For the first time, an association has obtained a database on this topic

Unexpected insights come from Sweden regarding the attitude of the citizens to cemeteries and gravestones: Young people desire rather traditional forms of the burial, while the older ones are interested rather in trends of the last decades such as natural burials. This is the result of a survey commissioned by the Swedish Natural Stone Association from the renowned Novus Institute there. Questioned were 1001 persons, who are representative in their age groups for the Swedish population.

The result is undoubtedly surprising, since it could be seen as the end of the change in burial culture in the West.

However, Kai Marklin, president of the association, is cautious and says: “Perhaps the attitude of young people is simply due to the fact that they have a longer period of mourning ahead of them than their elders and consequently want a reliable – and perhaps even beautiful – place to do so.“

Whether they stick with this attitude as they get older, however, is not known.

Particularly interesting, therefore, is the result of the second question from the study: which asked how the respondents wished for the burial of a close relative, such as the burial of their parents or friends. And also, here the young people granted a clear priority to the traditional forms, while the older ones themselves preferred again current forms.

The fact, thus, and importantly for the gravestone companies in Sweden to know, is: that at least at present the young consumers are interested in the cemetery and the gravestones.

This means: if you want to promote Grasteine, you have to talk primarily to the young people, less to the older ones.

The numbers in detail: in the age group of the 18 to 20-year-olds 49% of the asked ones wish themselves a traditional grave. By gender, a clear majority among men (57%) had this desire here.

With increasing age, however, this attitude changes, so that among 65- to 79-year-olds only 23% still prefer a traditional grave.

The question about burial for relatives produced an even clearer result. 57% from the group of the younger ones would select a traditional burial form. Conversely, among older people, 46% would prefer a grove.

“To our knowledge, there has never been such a survey anywhere before,“ says association president Kai Marklin.

The study provides the industry with a reliable basis for marketing decisions for the first time. Up to now, statistics on the consumption of natural stone have generally been poor: although it is known for the individual countries how much stone is produced and imported or exported in each case, this is not the case. On an international level, Dr. Carlo Montani collects these data in his statistics yearbook.

However, no one knows what concrete products these quarried stones end up in – whether they become windowsills, floor tiles, or wall panels, or go into gardens or cemeteries, to name a few possibilities. Perhaps individual associations collect this data, but it has not been published anywhere or appeared in annual reports.

Behind the survey is a comprehensive strategy of the Sveriges Stenindustriförbund, the name of the association in Swedish: with a total of four analyses, it wants to get to the bottom of the interests of the consumer in natural stone. In two surveys so far, it was a question of which materials the Swedes prefer for kitchen countertops or which materials they generally consider to be particularly environmentally friendly. We have linked our report on the results below.