In 2021, consumption of natural stone in Germany increased by +10.6% (by value) compared to the previous year 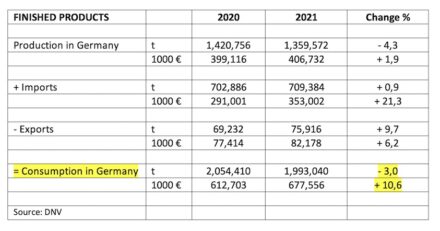 The total of stone products sold amounted to € 677.6 million, of which more than half was imported from abroad

The year 2021 was again a really good year for the natural stone sector in Germany, recognizable by the fact that consumption increased by +10.6% (by value) compared to the previous year. In this context, it is necessary to point out the sum in figures: it amounted to € 677.6 million thus well over half a billion. These figures have been published by the German Natural Stone Association (DNV).

Primarily, there are 2 developments that have led to the increase: on the one hand, the sector has benefited from the Covid-19 pandemic, because many citizens invested the money they would normally have spent on travel, culture, restaurants, or clothing in their apartments and houses; on the other hand, the new marketing campaign of the association is reflected here. This was launched in 2021 with the title “Zukunft Naturstein – natürlich nachhaltig“ (The future with natural stone – naturally sustainable) and shows, above all in the social media, what can be done with natural stone and that building with this material is climate-neutral.

The statistics are particularly interesting when the increased consumption of domestic extraction is contrasted. Indeed, the production of German companies increased by only +1.9% (by value) – consequently, imports must have gone up significantly.

The table confirms this: imports of natural stone rose by +20.3%, thus accounting for a good half of consumption, as in previous years. It should be noted: these were almost exclusively end products, such as facade slabs, polished floor tiles, or paving stones, to name just a few of the usual stone goods. 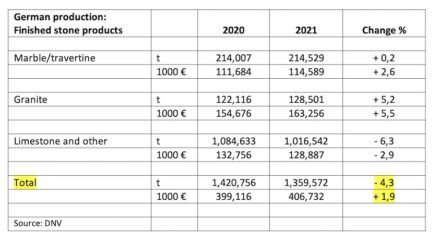 However, while Germany is a giant in terms of imports, it is a dwarf in terms of exports. It should be noted here, however, that the largest share of exports was achieved by companies in architectural projects at the highest technical level. It is only a handful of companies, but they are the heavyweights domestically as well.

This, in turn, makes it difficult for foreign suppliers to land contracts for large architectural projects in Germany.

Without taking any great risks, one can venture a forecast for German consumption of natural stone for the next few years: it will continue to rise, partly because the association’s information campaign will bear fruit.

But domestic production will benefit from this more than before: Finally, some companies that had recently reached the limit of their capacity invested in new and additional machinery.