Under the motto “Piano in the Quarry,“ the Polish city of Strzegom had the country‘s best pianists perform in a former quarry as part of its cultural festival at the end of August 2022 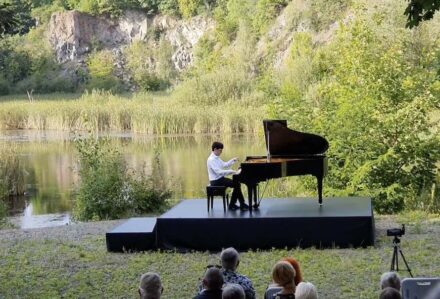 The city of Strzegom in southern Poland has a long tradition of quarrying and processing granite. There are currently about 30 active quarries in the area and, naturally, many abandoned ones. One of the inactive quarries is the one about 1.5 km from the center of the town, where a lake with a lot of wild nature has established itself. On the shore, from August 25 to 28, 2022, the 4th “Piano in the Quarry“ concert of classical music was held, as part of the “Strzegom A Cappella“ festival.

In the afternoons, the cream of Polish pianists performed on a makeshift stage by the lake, playing pieces by world-renowned composers, of course including Frédéric Chopin, because he was a native Pole and his piano works place the highest demands on musicians.

Two other venues were part of Strzegom A Cappella: the Gothic cathedral, a masterpiece of medieval stonemasonry, and a small church. The visitors in passing received information about the local natural stone: where it comes from, where it goes and what happens to its places of origin in the end.

The festival was organized by the city‘s cultural center (Strzegomskiego Centrum Kultury) together with the choir and chamber orchestra Capella Cracoviensis and supported by the Polish Ministry of Culture. As for the quarry as a venue, Fundacja Bazalt (Basalt Foundation) and the company Granex, located around the corner, took care of the details: they prepared the lakeshore, laid an electricity connection and fenced off parking spaces, etc.

About 600 visitors came to the event in the quarry during the 4 days.

Of course, we wanted to know if there is no problem with mosquitoes in nature around Strzegom. Krzysztof Skolak, head of the Granex and initiator of Fundacja Bazalt, said that the concerts already took place at 5 pm and thus had a few hours of peace from the pests. “At sunset, however, it can be bad,“ he added with a laugh. It would have been worse if it rained, as it did one day last year.