Notre-Dame de Paris: the approximately 1000 cubic meters of limestone needed for the reconstruction are to come from 9 quarries 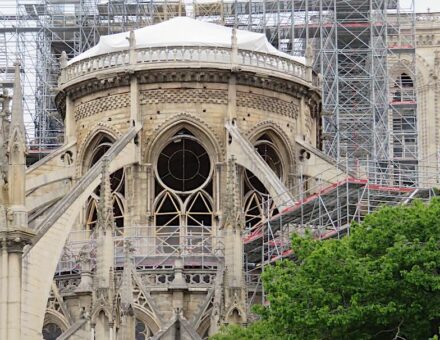 Suppliers are quarries from the area of Saint-Maximin (Oise) et Soissons (Aisne), located in the basin Lutétien

On April 15, 2019, the fire broke out in the roof of Notre-Dame de Paris Cathedral. Meanwhile, the entertainment sector has also taken up the theme: the traveling exhibition “Notre-Dame de Paris, l’exposition augmentée“ shows milestones from the 850-year history of the world heritage site in an augmented reality. It has already been on display at WorldExpo in Dubai, in Paris and in Washington D.C., will be shown in Dresden in Germany until January 2023, and is then scheduled to return to the U.S. in New Orleans.

Director Jean-Jacques Annaud has made the feature film “Notre-Dame in Flames,“ a documentary with dramatized scenes of firefighters battling the flames. The film has already been shown in cinemas in some countries.

After the phase of securing the structure and clearing away the rubble, the focus is now on procuring the materials for reconstruction. French President Emmanuel Macron had announced that reconsturction would take until 2024, by which time at least parts of the complex would have been faithfully restored and made accessible to visitors.

In December 2021, work began on cutting down the oaks from which the original 96-meter-high ridge turret (flèche) is to be reconstructed. Its collapse in the flames had gone around the world as a symbol of the fire catastrophe. Huge trees are needed, several centuries old and large enough to allow the long beams required to be sawn out of their trunks.

Since April, the limestones from which the destroyed vaults and parts of the walls will be renewed are also being quarried. In an elaborate procedure, the French Geological Institute BRGM had selected 9 quarries from the area of Saint-Maximin (Oise) et Soissons (Aisne).

They are not the original quarries, but they are all located in the basin of Lutétien, where the stones had been extracted before. This is the wider surroundings of Paris, where there was a sea about 40 million years ago and where the limestone was formed in the sediments.

In reports in newspapers and on television the quarry of La Croix-Huyard is particularly mentioned for the extraction of the replacement stones. It is said that the largest blocks and the hardest and most weather-resistant material can be found there.

It is always emphasized that the demands on the quality of the stone are particularly high: both in terms of appearance and strength, only the best pieces are selected in a rigorous process.

This is especially true for the reconstruction of the vaults.

A total of about 1000 m³ of the limestone would be needed, officials have informed.

As the work progresses step by step, there are also positive surprises. Special discoveries were made, for example, by the scientists of the Inrap Archaeological Institute when they took the opportunity to lift the floor in the central nave. In the rubble there, they came across a coffin from the Middle Ages, in which an important personality had probably been buried. 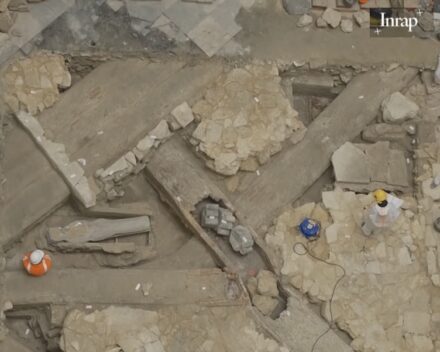 They also found numerous remains of stone sculptures or decorative elements, some of which still bore the original painting. An archaeologist announced in a video that they had a lot of research to do for a few years and that after that they would know more about how the interior of the cathedral used to resemble.

Most recently, the ground had been resealed after 9 weeks of archaeological excavations. However, the refilling was made only with sand and clay, as it is said in the video: one did not want to block future generations their way to the treasures of Notre-Dame.

In May 2022, former army general Jean-Louis Georgelin, named by Macron as coordinator of the project, visited the site once again and said of the progress of the work, “I was in Mayenne in December, where the oaks for the ridge turret were being sawn, and a few weeks ago in Hérault, where the great organ is being restored. I’m delighted that all of France is joining us at the bedside of Notre-Dame.“

In July 2022, Culture Minister Abdul Malak had stressed that the 2024 deadline would be met. According to plans, a grand Te Deum will be held in the cathedral on April 14, five years after the fire.

Along with the restoration, there will also be a redesign of the immediate surroundings. The international tender for this was won by the Belgian urban planner Bas Smets. According to his concept, a lot of greenery will be planted around the cathedral in order to adapt the city to climate change. At the same time, he wants to better show off the church’s architecture. The visitor center will be moved underground to the level of the underground parking garage at the level of the Seine.