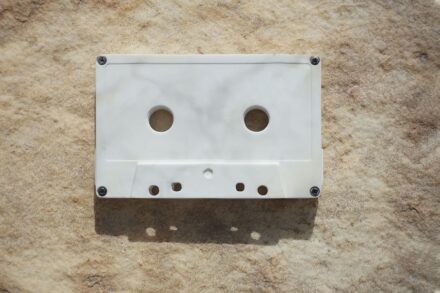 The Henraux International Sculpture Prize (Premio Internazionale di Scultura Henraux) selects artists whose work addresses a current issue facing humanity. In addition, marble must be their material, and they should also go beyond the usual limits of the use of the material. So one should not expect a hammer and chisel to be used here. Rather, the 3 winners will turn to CNC-controlled machines.

The prizes also include the fact that the ideas set up will be made in the workshops of the Henraux company and with its marble – one copy will go to the artist, another to the Fondazione Henraux, which offers the prize.

In 2022, the prize was awarded for the fifth time, and rarely before have the winners strayed so far from classical sculpture. In terms of themes, however, they were, as usual, very close to world events. All 3 winners were women, by the way.

In her work “Marmi“, Nikita Gale (USA) made the material as such the subject and posed the question of whether the durability of the material still plays a role in the use of marble today. She expressed this question very indirectly: she had recorded the sounds from quarries and stone factories and created a sound composition from them, which she transferred to the magnetic tapes of the – from today’s perspective: primeval – cassette recorders. 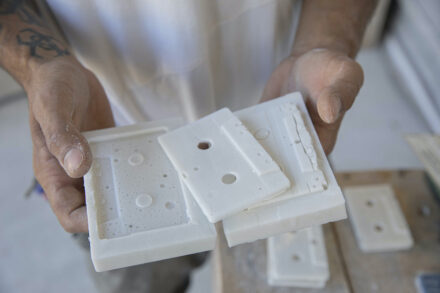 The cassettes as such, formerly made of plastic, she had recreated from the waste material marble dust and inserted the reels with the tapes as usual. 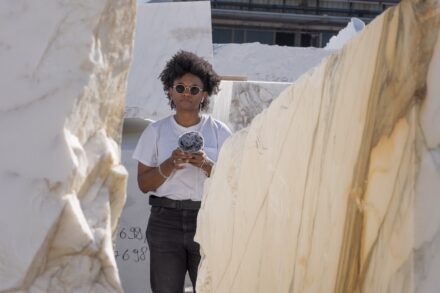 So you could hear the sounds from the working of the millions of years old marble from a sort of fossil sound apparatus. 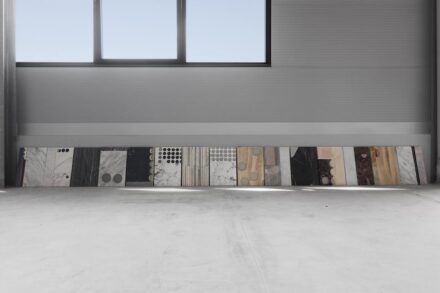 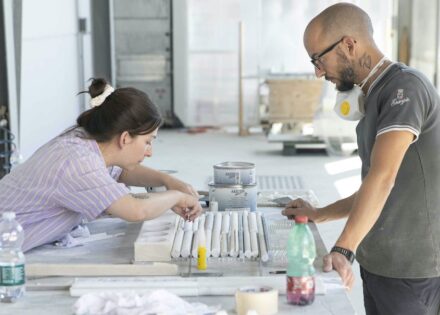 Lorenza Longhi (Italy) dealt entirely with the theme of waste in her project “Business Card(s)“. She took leftover pieces from the Henraux workshops and recomposed them. 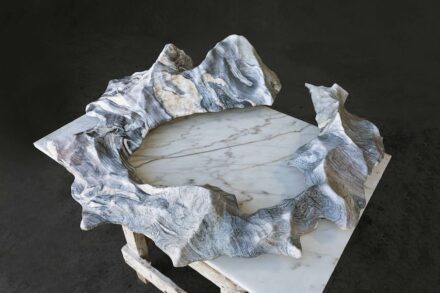 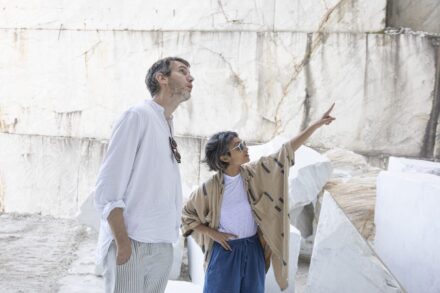 Himali Singh Soin (India, UK) devoted herself to colonization. As a symbol of conquest, she recreated the contours of Deception Island, a former whaling station in the Shetland Islands archipelago. Henraux’s white marble took on the role of the Arctic Sea. To complement this, there was a performance at the opening. 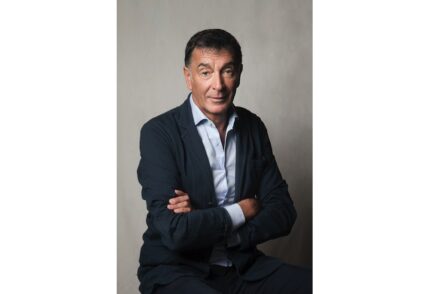 The Premio Internationale di Scultura Henraux was established in 2012. The current CEO and president of the Fondazione, Paolo Carli, wanted to continue the tradition of Erminio Cidonio. He was head of the company from 1954 to 1971 and had contributed significantly to the modernization of Italy’s stone industry after World War II: he promoted sculptors who worked on the design of everyday objects made of marble, and from 1960 on he invited the most famous artists of the time to try their hand at the white Henraux marble. A list on the company website names Henry Moore, Hans Jean Arp, Henri-Georges Adam, Joan Miró, Rosalda Gilardi, and many more.

The selection process that leads to the 3 winners of the prize was unusual:
* In the 1st step, 5 representatives of important art institutions submit the project of an artist of their choice. Participants of this so-called “Altissimo Academy“, whose title refers both to the marble of Monte Altissimo and to the rank of the representatives, were this year: Lorenzo Giusti, director of GAMeC – the Gallery of Modern and Contemporary Art, Bergamo; Fatima Hellberg, director of the Bonner Kunstverein, Bonn; João Laia, chief curator of Kiasma – the National Museum of Contemporary Art, Helsinki; Luca Lo Pinto, director of MACRO – the Museum of Contemporary Art, Rome; Lucia Pietroiusti, curator and founder of the General Ecology project of the Serpentine Galleries, London; Yasmil Raymond, director of Portikus and rector of the Städelschule, Frankfurt; and Zoé Whitley, director of the Chisenhale Gallery, London.

* In the 2nd step, the jury selects the 3 winners from these submissions. Jury members this year were: Edoardo Bonaspetti, artistic director of the Henraux Foundation; Vincenzo de Bellis, associate director and curator for the visual arts of the Walker Art Center, Minneapolis; Letizia Ragaglia, director of the Kunstmuseum Liechtenstein, Vaduz; Eike Schmidt, director of the Gallerie degli Uffizi, Florence; and Roberta Tenconi, curator of Pirelli HangarBicocca, Milan.

* The winners, for their part, are then invited by the Fondazione to realize their ideas at the company headquarters in Querceta di Seravezza, not far from Carrara.

This year there was a special feature in the presentation of the winning works: they were on display in the company’s workshops until September 15, together with works of art from the Fondazione. The art works date back to the 1960’s and 1970’s, collected at that time by Erminio Cidonio, and are now on display again after a thorough restoration. 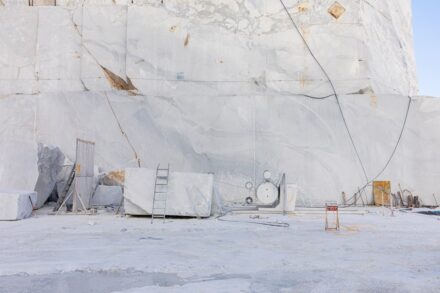