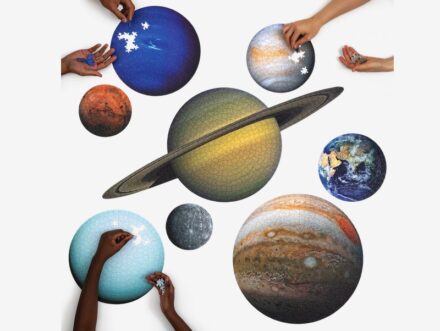 “The Planets!“ is a 2000-piece puzzle set featuring these 8 celestial bodies of our solar system. Referencing their size variation, these toys range in size from Mercury at only 7“ wide all the way up to Jupiter with a width of 19.5“ and Saturn, whose rings span a width of 39.“ Not included is the sun as it would go far beyond those dimensions (and it is a star, not a planet). Each puzzle box includes a two-sided poster that will help assembling each object, along with some interesting facts about each of the eight planets.

An analysis of ancient Obsidian stone tools challenges long-held beliefs about what caused radical change in Bronze age civilizations on the island of Crete.

Brachot Surfaces and Beltrami will be united under the name Brachot, as of October 01, 2022.

A seven-year-old Italian girl on holiday in a German hotel died after a marble statue collapsed on her.

The imposing ruins of the Portara, or gate, of a temple dedicated to Apollo, which was built in the 6th to 7th century BC, still stand on the islet of Palatia on Naxos.

National Geographic tells the story of how Jean-François Champollion solved the riddle of the Rosetta Stone making Hieroglyphics readable.

Video of the month: Short films in French show how the Fort de la Conchée off the port city of Saint-Malo is being restored. We had reported about the stone army monument in the English Channel (1, 2).